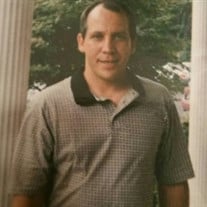 Andrew Chalfant, 49, of Union, KY, passed away on Monday, May 18, 2015, at his home. Born on April 20, 1966 in Cincinnati, OH, he was a son of the late Ernest Clark and Bobbie Jean Butler Chalfant. On September 16, 1995, he married Angela Marie Massa Chalfant, and his dear wife survives his passing. A carpenter with Century Construction in Erlanger, Andrew loved working, being outdoors, and fishing. He enjoyed spending time with his family and friends, who will never forget his great personality, quick wit, and pranks. In addition to his parents, he was also preceded in death by a sister, Norma Reeves. In addition to his wife of 19 years, Angie, he is survived by 4 children: Nicole Massa of Clermont County, OH, Patricia Hawkins of Yorktown, VA, Andrew Massa of Covington, KY, and Nicholas Massa of Florence, KY; 2 grandchildren: Andrew Massa and Isaiah Hawkins; 3 sisters: Patricia Thacker, Jane Chalfant, and Linda Temke; 3 brothers: Ernie Chalfant, James Chalfant, and Donald Butler; and a host of extended family and friends. The funeral service will be held at 2 pm on Saturday, May 23, 2015, at the Woodhead Funeral Home, Falmouth. Serving as pallbearers will be Drew Massa, Nick Massa, John Thacker, James, Michael, Kevin, Matthew, James “Tootie” Chalfant, Dave Brandenberg, and Ernest Chalfant. The visitation will be from 12-2 pm preceding the service. Interment will take place in the Riverside Cemetery, Falmouth. Memorials are suggested to the Woodhead Funeral Home, Falmouth.

The family of Andrew Chalfant created this Life Tributes page to make it easy to share your memories.

Send flowers to the Chalfant family.