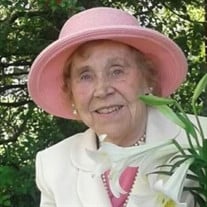 Anna Elizabeth Fogle Dennis, 99, of Ft. Mitchell, KY, formerly of Berry, KY, passed away on Thursday, March 3, 2022, at St. Elizabeth Health Care in Edgewood, KY. Born on January 10, 1923 in Boyd (Harrison County), KY, “Anne” was the daughter of the late Robert Harrison and Myrtle Frances Knox Fogle. A 1942 Berry High School graduate, Anne attended the Campbell’s Business School for two years before joining Tower Personnel in the Carew Tower, Cincinnati, OH, where she worked as an employment counselor for 20 years. On December 1, 1945, she married Clarence Dennis, II, and her dear husband of 58 years preceded her in death on February 27, 2003. Anne cherished her family farm, and all of the memories made there. One of the annual highlights of the Boyd Community was the July 4th picnic hosted by her parents and later by Anne and Clarence. Anne loved to make a joyful noise, and she started sharing her vocal talent as young girl, when the late Joseph Woodhead would pick her up from school, to sing at funerals. At the center of her life was her faith and her family. For 26 years she was a member at St. Luke United Methodist Church in Covington, KY and for 44 years, she was a member of the Immanuel United Methodist Church, where she sang in the church choir; taught Sunday School for 26 years; served on the District Ecumenical Committee supporting the youth of 45 churches, and attended the Kentucky United Methodist Conference as a delegate; hosted the Wednesday Night Fellowship; and participated in Sarah’s Circle, the United Methodist Women, and Happy Loafers. Proud to be a Republican, Anne was a member of the Kenton County Republican Women, and her keen interest in history kept her always looking forward to the meetings and activities of the Christopher Gist Historical Society. She was also a member of the Kenton Heights Women’s Club, and her son and caregiver, Michael, managed her daily commitments, making it possible for her to be an active part of many activities well into her nineties. The epitome of Southern charm and grace, Anne was at home almost anywhere. Whether she was planting or pruning in her flower garden, providing another set of hands on the farm, singing at a church service or community event, attending or planning a District United Methodist Church function, or caring for her family and friends, Anne always managed her plentiful plate, smiling, thankful, and genuinely interested in others. She is survived by three children blessed to have her as their Mom: Clarence “Butch” (Danelle) Dennis, III, of Ocala, FL, Michael Dennis of Park Hills, KY; and Anita Dennis (Darien) Kearns of Louisville, KY; 3 grandchildren: Michael (Laura) Kearns, Joshua Kearns, and Kathryn Elizabeth Kearns (Austin) Schaffer; 2 great grandchildren: Olivia Kathryn Kearns and Madison Elizabeth Kearns; several nieces, nephews, and a host of extended family and friends. In addition to her parents and husband, she was preceded in death by a daughter, Charlotte Anne Dennis in 1948; two brothers: Robert Fogle and James Fogle; two half-brothers, Luther Fogle and Staley Fogle; and a half-sister, Eula Anderson. Funeral services will be held at 11:30 a.m. on Saturday, March 12, 2022, at Immanuel United Methodist Church, 2551 Dixie Highway, Lakeside Park, KY 41017, with Dr. Kelly McClendon officiating. Serving as pallbearers will be Michael Kearns, Joshua Kearns, Austin Schaffer, Jerry Dennis, Bradley Dennis, and David Osborne. The honorary pallbearers will be Darien Kearns, Charles Anderson, Roger Anderson, and her church family. The visitation will be from 9:30-11:30 a.m. on Saturday preceding the service at her church. Interment will take place at 2:00 p.m. in the Pythian Grove Cemetery, Berry, with Bro. William Hill officiating. Memorials are suggested to the Immanuel United Methodist Church Choir, the KY United Methodist Children’s Home: 1115 Ashgrove Road, Nicholasville, KY 40356, or the Colemansville Christian Church: c/o Sheree Smiley, 727 Renaker Berry, KY 41003. Woodhead Funeral Home, Berry, is caring for the family.

The family of Anna Elizabeth Fogle Dennis created this Life Tributes page to make it easy to share your memories.

Send flowers to the Dennis family.