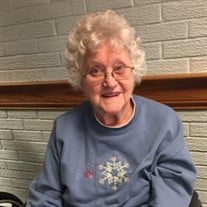 Betty Jean Jarvis Haley, 83, of Falmouth, KY, passed away on Sunday, August 11, 2019 at the River Valley Nursing Home in Butler. Born on May 10, 1936 in Morgan, KY she was a daughter of the late Fred and Edna Owens Jarvis. On April 24, 1959 she married Allen Haley and he preceded her in death on February 14, 2015. Betty was a hard worker, she co-owned the Falmouth Laundromat with her husband, was a 40+ year employee of the Lenoxburg Meat Locker, cleaned homes, and babysat, but always had time to care for her family. She loved to work in her garden and enjoy the flowers she grew. She was a member of the Lenoxburg Baptist Church. She is survived by a daughter; Barbara Haley Richie of Butler, KY, a son; David (Robin Jenkins) Haley of Falmouth, KY, 3 grandchildren; Joey Richie, Chris Haley, Brian Richie, 10 great grandchildren, 4 great-great grandchildren, a sister; Ruth Thompson, and a brother; Freddy Jarvis. In addition to her husband, she was preceded in death by 2 grandchildren; Brandon Haley, Ashley Kelly, 2 brothers; Buddy Earl Jarvis, Carl Ray Jarvis, and 4 sisters; Mary Davis, Clara Mae Williams, Sue Heist, and Dorothy Brown. Funeral services will be held on Thursday, August 15, 2019 at 1:00 P.M. at Woodhead Funeral Home in Falmouth with Bro. Don Mays officiating. The burial will follow in the Johnsville Cemetery. Pallbearers for the service will be Joey Richie, Chris Haley, Fred Kelly, Caleb Neuspickel, Timmy Jarvis, Rick Thompson. Honorary Pallbearers will be Richard Thompson, Larry Davis, Bennie Brown, Mike Haley, and Robert Wood. The visitation will be held from 5-8:00 P.M. on Wednesday at the funeral home. Memorial contributions are suggested to Miracle Point Playground: PO Box 88, Falmouth, KY 41040

The family of Betty Jean Haley created this Life Tributes page to make it easy to share your memories.

Send flowers to the Haley family.