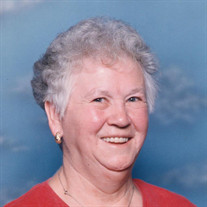 Beulah Hisel Winkle, 80, passed away on Monday, August 23rd, 2021 at the River Valley Nursing Home in Butler, KY. She was born on September 7, 1940 in Crittenden, KY, to the late Samuel Richard Hisel and Eva May Parker Hisel. She would later... View Obituary & Service Information

The family of Beulah Hisel Winkle created this Life Tributes page to make it easy to share your memories.

Send flowers to the Winkle family.