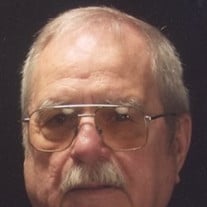 Bruce Lee Westbrook, Sr., 81, of 407 Maple Avenue, Falmouth, went home to his Lord & Savior, Jesus Christ on Sunday, July 31, 2016.   He was born on October 4, 1934 in Danville, Virginia, the son of Ernest Westbrook, Sr., and Mary Laila Jones Westbrook. He was predeceased by 2 brothers, Ernest Westbrook, Jr., and Kenneth W. Westbrook; two sisters, Ramona Westbrook and Gloria Westbrook Turner; and one son, Steven Westbrook. He is survived by two sons;   Bruce L. Westbrook, Jr. (Sue) of Oconomowoc, WI and Jon Scott Westbrook (Kim) of the residence; one daughter, Cheryl Steinbock (Jim) of Columbia, SC; one step-daughter, Kim King (David) of Falmouth, KY; two sisters, Florence Westbrook and Faye Westbrook, both of Danville, VA; nine grandchildren; and fifteen great grandchildren. He was married to the late Linda Sue Mockbee who died on May 28, 2011. He retired from F & F Composite Group, Inc., as a Senior Executive Vice President, Manufacturing/Engineering. He was a veteran of the U.S. Army having served in the Korean War, retiring as a Chief Warrant Officer, after 18 years of service.   He was a member of the Hardin-Browning Post 109, Falmouth, served as Post Commander, and was instrumental in the building of the Veteran’s Memorial Park in Falmouth. A member of Falmouth United Methodist Church, he served as Chairman of the Administrative Council, and assisted in the church’s Community Meals Program. Funeral services will be held at 11:00 a.m. on Thursday, August 4, 2016, at the Falmouth United Methodist Church, 230 W. Shelby Street, Falmouth, KY 41040.   The visitation will be from 9             to 11 a.m. at his church. Interment will take place in the Riverside Cemetery, Falmouth, with full military honors by the Hardin-Browning Post #109. In lieu of flowers, memorials may be made to the Hardin-Browning Post #109: 111 Montjoy Street, Falmouth, KY 41040 or the Falmouth United Methodist Church: 230 W. Shelby Street, Falmouth, KY 41040.

The family of Bruce Lee Westbrook created this Life Tributes page to make it easy to share your memories.

Send flowers to the Westbrook family.