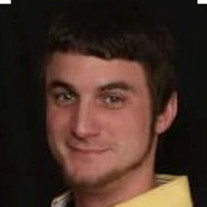 Christopher Michael Cummins, 30, of Falmouth, KY, passed away on Friday, July 15, 2016, at the University of Kentucky Medical Center in Lexington. Born in Harrison County, KY on October 9, 1985, he was the son of Michael Lee and Tresa Darlene Maxedon Cummins. A 2004 graduate of Pendleton High School, “Chris” worked as a farm hand, and he loved drawing, music, John Wayne, the Cincinnati Reds, the Cincinnati Bengals, and playing Nintendo games. In addition to his parents, Michael and Tresa Cummins, he is survived by his son, Cain Cummins Hesler; his brother, Grant Lee Cummins of Falmouth, KY; his sister, Devin Dennie Applegate of Maysville, KY; two nieces: Harlee Osborne and Brooklyn Applegate; one nephew, Cason Applegate; and a host of extended family and friends. He was preceded in death by his grandparents: Shelby and Wanda Cummins, Wayne and Kathy Everman, and Dean and Penny Maxedon. Funeral services will be held at 11 am on Thursday, July 21, 2016, at the Woodhead Funeral Home, Falmouth, with Bro. Darrell Breeden officiating. The visitation will be from 5-8 pm on Wednesday at the funeral home.   Interment will take place in the Mt. Vernon Cemetery, Pendleton County.   In lieu of flowers, the family suggests donations to the Cain Cummins Hesler Savings Account, c/o any Fifth Third Bank location.

The family of Christopher Michael Cummins created this Life Tributes page to make it easy to share your memories.

Send flowers to the Cummins family.