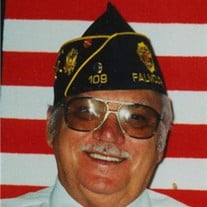 Claude Ray Hammond quietly passed on September 29, 2011, at his home with his loving family by his side. He was born on November 28, 1933 to Claude and Carrie Hammond, and he was raised in Mt. Olivet, KY. Ray served his country in the United States Army, stationed mostly in Germany, and was honorably discharged. After the service Ray worked as a driver for Pepsi and then later for Black River Mine, where in 1989, he retired. Following his retirement, Ray became active in his church and community. Ray was a deacon at Mt. Moriah Christian Church and was a strong witness for Christ. He brought many to the church. Since 1999, Ray was also Commander of the American Legion Post #109 in Falmouth. Under his guidance, the American Legion has grown and been able to show a strong presence to veterans and their families in the area. Ray is survived by his loving wife of 28 years, Judy; his son, Roger Hammond (Teresa) of Cynthiana; two step-daughters: Robin Anderson of Morningview and Taffy Estepp (Tim) of Falmouth; two lovely step granddaughters: Hailey McKinney and Samantha Anderson; and a dear family friend, Noel Jiminez. He has many brothers and sisters still alive, including his twin sister, Carrie Mae Scott. For any who knew Ray, his humor and ability to bring out the most in those around him, were his best attributes. He enjoyed going in the mornings to the Legion Post and making coffee during the week for those who had time to stop in and enjoy. The conversations were always lively and some of the best ideas and work came out of those mornings. Ray was always a joy to be around. Matthew 25:23 “His Master replied, ‘Well done, good and faithful servant; you have been faithful with a few things; I will put you in charge of many things. Come and share your master’s happiness!’” Funeral services will be held at 11:00 a.m. on Monday, October 3, 2011, at Woodhead Funeral Home, Falmouth, with Bro. Darrell Breeden officiating. The visitation will be from 3-8:00 p.m. on Sunday at the funeral home Interment will take place in the Riverside Cemetery, Falmouth, with full military honors by the Hardin- Browning Post #109. Memorials are suggested to the Hardin- Browning Post #109.     var item = document.getElementById("tukios_iframe"); // Now calculate our height. if (item){ //Looks like we have tukios_iframe. Lets do stuff var currentWidth = item.clientWidth; var proposedHeight = (currentWidth + 80) * 9/16; item.height=proposedHeight; } PDF Printable Version

Claude Ray Hammond quietly passed on September 29, 2011, at his home with his loving family by his side. He was born on November 28, 1933 to Claude and Carrie Hammond, and he was raised in Mt. Olivet, KY. Ray served his country in the United... View Obituary & Service Information

The family of Claude Ray Hammond created this Life Tributes page to make it easy to share your memories.