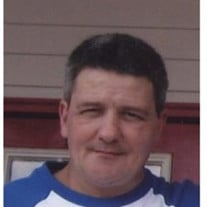 Biography David Napier, 50, of Butler, KY , passed away on Monday, December 16, 2013, at the University of Cincinnati Medical Center. Born in Covington, KY on April 13, 1963, he was a son of Nancy Johnson Napier and the late Robert Lee Napier. A 1984 graduate of Pendleton High School, he built skids for Napier Pallet in Pendleton County, and he attended Butler Baptist Church. In addition to his father, he was preceded in death by a brother, Billy Ray Napier. In addition to his mother, Nancy, he is survived by 3 brothers: Robert Napier , Leroy Napier, and James Napier, all of Falmouth, KY; 2 sisters: Brenda Wachter of Augusta, KY, and Patricia Courts of Falmouth, KY; several nieces and nephews; and a host of extended family and friends. Funeral services will be held at 2 pm on Thursday, December 19, 2013, at the Woodhead Funeral Home, Falmouth. The visitation will be from 5-9 pm on Wednesday, December 18, 2013, at the funeral home. Interment will take place in the Riverside Cemetery, Falmouth. Memorials are suggested to the family.

The family of David Napier created this Life Tributes page to make it easy to share your memories.

Send flowers to the Napier family.