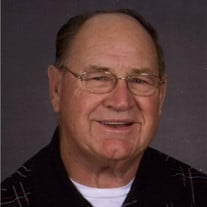 Donald Ray Sydnor, 80, of Butler, KY, passed away on Saturday, January 27, 2018, at his home. Born in Pendleton County on May 20, 1937, he was a son of the late William Luther and Nora Price Sydnor. On June 6, 1959, he married Betty Morris Sydnor, and his dear wife and caregiver survives his passing. From 1957 to 1982, Donald worked as a mechanic for Queen City Chevrolet in Cincinnati. In retirement, he continued farming. Donald was a member of the Second Twelve Baptist Church and a member of the Golden Hawks Archery Club in Clermont County, OH. In addition to his wife of 58 years, Betty, he is survived by one son, Mark Ray (Mindy) Sydnor of Butler, KY; three granddaughters: Morgan Elizabeth, Madison Ray, and Marcella Dawn Sydnor; one brother, Shelby Sydnor of Tampa, FL; a sister-in-law, Norma Sydnor; several nieces and nephews; and a host of extended family and friends. In addition to his parents, he was preceded in death by three brothers: Harry, Billy, and Clinton “Pee Wee” and three sisters; Katie, Mattie, and Betty. Funeral services will be held at 2 pm on Wednesday, January 31, 2018, at the Second Twelve Mile Baptist Church, 5793 Highway 154, Butler, KY 41006. The visitations will be from 5-8 pm on Tuesday, January 30, 2018 at his church, and from 1-2 pm on Wednesday preceding the service. Interment will take place in the Peach Grove Cemetery, Pendleton County. In lieu of flowers, memorials are suggested to Hospice of Hope, Linda’s Legacy Scholarship, c/o the Falmouth Rotary Club, or to PCEF, Evan Peoples Scholarship. Woodhead Funeral Home, Falmouth, is taking care of the family.

The family of Donald Ray Sydnor created this Life Tributes page to make it easy to share your memories.

Send flowers to the Sydnor family.