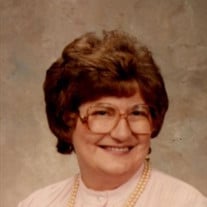 Emma “Dolly Jenkins” Field McDonald, 72 of Falmouth, formerly of Florence, KY, passed away on Monday, April 21, 2014, at the Hospice of St. Elizabeth Health Care in Edgewood. Born in Falmouth, KY, on October 8, 1941, she was a daughter of the late William and Mary Bishop Jenkins. In addition to her parents, she was preceded in death by her husbands, J. P. Field, son of the late Preston and Elizabeth Field in 1974 and Melva L. “M.L.” McDonald, son of the late Melva and Bertha McDonald in 1999. A realtor for 25 years, she retired from Bill Bramble Realty, belonged to the Ft. Mitchell Baptist Church, served in the Boone County Republican Party and on the board for the Northern Kentucky Association of Realtors. Surviving are daughters: Mary Beth Field of Ft. Wright, KY, Ella (Dickie) French of Falmouth, KY, Lisa (Dan) Wagner of Union, KY; her son, William “Bucky” Field of Bledsoe, KY; several nieces and nephews; and her best friend from high school, Jane (Joe) Blackaby of Falmouth, KY. Dolly was a lifelong animal lover whose heart and home were never too crowded for one more stray. In her quieter moments, she was an avid reader, sometimes reading a book or more a day. As a homemaker, Dolly was a talented seamstress, who made most of her daughters’ clothes when they were young as well as special outfits for parades. An excellent cook, she treated her children to many special treats such as donuts and desserts. She and M.L. participated in supporting many community projects including the Boone County Republican Party and the Boone and Grant County Animal Shelters. Anonymously, they were “Secret Santa” to families in Northern Kentucky, devoting one room in their house for that project. The funeral service will be held at 11 am, Friday, April 25, 2014, at the Woodhead Funeral Home, Falmouth, with Larry “Poncho” McClanahan officiating. The visitation will be from 5-8 pm on Thursday at the funeral home. Interment will take place in the Riverside Cemetery, Falmouth. Memorials are suggested to the Boone County Animal Shelter, 5643 Idlewild Road, Burlington, KY 41005, Grant County Animal Shelter, 218 Barnes Road, Williamstown, KY 41097, Pendleton County Animal Shelter, 1314 Bryan Griffin Road, Butler, KY 41006, or the Harvest Community Church Building Fund, 111 E. Shelby Street, Falmouth, KY 41040.

The family of Emma 'Dolly Jenkins' Field McDonald created this Life Tributes page to make it easy to share your memories.