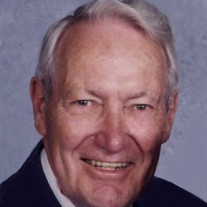 During his 92 years, Rev. Mr. Ernest Bernard Hillenmeyer, Jr. lived by the motto his father instilled during his boyhood on their Lexington farm: &#8220;Be honest, and be of service to your community.&#8221; Mr. Hillenmeyer embodied that creed... View Obituary & Service Information

The family of Ernest Bernard Hillenmeyer Jr. created this Life Tributes page to make it easy to share your memories.

Send flowers to the Hillenmeyer family.