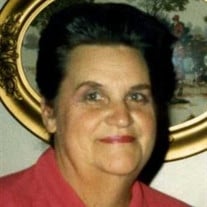 Eurilla Nell “Billie” Pribble, 85, of Butler, KY, passed away on Thursday, February 21, 2013, at the River Valley Nursing Home in Butler. Born in Pendleton County, KY on March 12, 1927, she was a daughter of the late Willard Henry and Mary Wright Byrd. A graduate of Morgan High School, she married Elmo Pribble in 1945, and her dear husband preceded her in death on May 19, 1997. She was a homemaker, a former employee of Hyde Park Men’s Clothing, a former employee of Dr. Scholl’s in Falmouth, and a member of the Pleasant Hill Christian Church, where she was active as a Sunday School teacher, a Bible School teacher, and a director of many Christmas plays. “Billie” was a creative homemaker who shared her gifts and talents of cooking, painting, making crafts, and arranging flowers with her family and friends. She also loved playing euchre with her late husband and many friends. In addition to her parents and husband, she was preceded in death by 2 sons: Thomas Edward “Mike” Pribble and Daniel James “Dan” Pribble; and 1 sister, Eva Jean Jones. She is survived by 5 children: Karen Lee (Jim) Annunziata of Boca Raton, FL, Sylvia (Vaden) McClanahan of Falmouth, KY; Gladys (Tony) Smith, Judith Nell Pribble, and Tony Pribble, all of Butler, KY; several grandchildren; several great grandchildren; 1 brother, Rollins Byrd of California; and a host of extended family and friends. The funeral service will be held at 3:00 p.m. on Sunday, February 24, 2013, at the Woodhead Funeral Home, Falmouth, with Dr. Mike Schafer officiating. The visitation will be from 1-3:00 p.m. on Sunday preceding the service at the funeral home. Interment will take place in the Butler Cemetery, Pendleton County. Memorials are suggested to the charity of one’s choice.

The family of Eurilla Nell Pribble created this Life Tributes page to make it easy to share your memories.

Send flowers to the Pribble family.