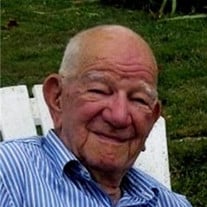 Floyd Elmer Wills, 97, passed away on Tuesday, May 20, 2014, at his home. He was born on August 5, 1916, on the same farm where he died. On December 30, 1945, he married Leona Helen Wilson Wills at the Carlisle Christian Church parsonage, and his dear wife of 66 years preceded him in death on May 16, 2012. In addition to his wife, he was also preceded in death by his parents. A 1936 graduate of Morgan High School, Floyd began his education in the first Pendleton County one-room school. He was a lifelong Pendleton County farmer, always eager to adopt new ideas and implement new technology. When Rural Electric first came to Pendleton County, he learned to be an electrician through self-study and work experience. For approximately 50 years, he was an inspector for the Burley Tobacco Growers Co-op. At the age of 60, when many are making plans for retirement, Floyd joined the Pendleton County School System. For 22 years, he helped to maintain the daily operation of the district and supervised the buildings and grounds of the county’s schools. He was instrumental in many building and remodeling projects. He was honored by the Pendleton County School System on their Wall of Fame for his remarkable contributions to the Pendleton County community through his life’s work and volunteer efforts. On a framed tribute in his honor which hangs at Pendleton High School, Floyd is recognized for his induction to the Wall of Fame: “Floyd Wills has provided leadership and support to the Pendleton County community. He has exemplified the mission of the school system by building on the firm foundation he gained as a child in the system’s early schools, and his education and service in the community in which he has lived. The Pendleton County School System will always be indebted to his ‘true gentleman.’” He was a member of the Falmouth Christian Church, and he was active in Woodmen of the World Chapter #611 , serving in several local, area, regional, state, and national leadership roles. For 45 years, Floyd served as a 4-H Leader, leading youth and supporting numerous programs through the 4-H Council and the Pendleton County Fair. He was a member of the Pendleton County Fair Board, the Pendleton County Beef Cattle Association, the Pendleton County Farm Bureau, and many other organizations. He is survived by two sons: Steven Floyd (Nancy White) Wills of Florence, KY and David Charles Wills of Winchester, KY ; 6 grandchildren: Lee Ann Wills (Greg) Kramer, Sue Ellen Wills (Wayne) Lemmons, Crystal Diane Wills (Brandon) Greene, Bradley David (Adreanna) Wills, Laura Susan Norman (Johnie) Tucker, and John Arthur Norman; 8 great grandchildren: Greylee Ruth Kramer, Hunter I. Lemmons, Mia L. Lemmons, Thomas Bradley Wills, Taylor C. Kramer, Mariah R. Kramer, Saya Isabella Greene, and Kimber Marie Wills; his brother, Earl H. Wills of Independence, KY; and a host of extended family and friends. The funeral service will be held at 11 am, Saturday, May 24, 2014, at the Woodhead Funeral Home, Falmouth, with Steve Delany, Robert Jones, and Rick Halcomb officiating. Serving as pallbearers will be Johnie Tucker, John Norman, Brandon Greene, Bud Wills, Greg Kramer, and Bradley David Wills. The honorary pallbearers will be the officers and board of directors for Woodmen of the World Chapter #611. The visitation will be from 4-8 pm on Friday, May 23, 2014, at the funeral home with a Woodmen of the World service at 7:30 pm. Interment will take place in the Carlisle Cemetery, Nicholas County.Memorials are suggested to the Falmouth Christian Church, 303 W. Shelby Street, Falmouth, KY 41040 or the Pendleton County 4-H Clubs, 45 David Pribble Drive, Falmouth, KY 41040.

Floyd Elmer Wills, 97, passed away on Tuesday, May 20, 2014, at his home. He was born on August 5, 1916, on the same farm where he died. On December 30, 1945, he married Leona Helen Wilson Wills at the Carlisle Christian Church parsonage,... View Obituary & Service Information

The family of Floyd Elmer Wills created this Life Tributes page to make it easy to share your memories.

Send flowers to the Wills family.