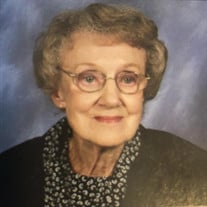 Garnet Ruth Fardo Sears, 97, of Nicholasville, KY, formerly of Falmouth, KY, went home to be with the Lord on Thursday, June 17, 2021 at Bridgepoint at Ashgrove Woods in Nicholasville, KY. She was born on May 23, 1924 in Newport, KY, and was the daughter of the late Laurel and Alma Sprague Fardo. She graduated from Campbell County High School in 1940 then attended and graduated from Miller’s Business College in Cincinnati, OH. She worked as an Executive Secretary for seven years before moving to Falmouth in May, 1948. In Falmouth, she worked as a secretary to the late attorney Marvin Davis and served as a court reporter on several occasions. Garnet received her Bachelor of Arts degree Summa Cum Laude from Georgetown College and received her Master’s Degree from the University of Kentucky. She began her teaching career at the Falmouth High School, where she taught for seven years in the Business Education Department. She then went to Pendleton County High School where she taught for twenty-three years, thus completing thirty years of teaching. She was a member of the Kentucky Retired Teachers Association and the Pendleton County Retired Teachers Association. During the 32-year pastorate of her late husband, Rev. Carl Sears, at the Falmouth Baptist Church, she was vitally interested in all the church’s activities and served in various capacities. She was always busy in the children’s department of the Sunday School, served as president of the W.M.U., sang in the church choir, and served, whenever needed, as the church pianist. She had been a member of the Falmouth Baptist Church since March 1948. She married Rev. Carl Sears on August 28, 1946, and he preceded her in death on March 2, 2004. Their only child, Brent Sears, preceded her in death on August 31, 2012. She is survived by her daughter-in-law Sharon Sears; grandson Shane (Michelle) Sears; and granddaughter Shelly (Jeremy) Miller. She is also survived by great-grandchildren: Jacob Sears, Abigail Sears, Corbett Sears, Laurel Barnett, Hunter Miller, and Shawna Miller; and a great-great-grandson Mateo Vega. Garnet was also preceded in death by her brother, Irvin Fardo. She was a devoted wife, mother, grandmother, great-grandmother, great-great-grandmother, a dedicated teacher, and a good friend to many. She will be missed by all who knew her. Funeral services will be held on Tuesday, June 22, 2021 at 1PM at the Falmouth Baptist Church in Falmouth, KY, with Bro. Cohen Copley officiating. Visitation will take place from 11 AM-1PM preceding the service, also at the church. Garnet’s final resting place will be the Riverside Cemetery in Falmouth.

Garnet Ruth Fardo Sears, 97, of Nicholasville, KY, formerly of Falmouth, KY, went home to be with the Lord on Thursday, June 17, 2021 at Bridgepoint at Ashgrove Woods in Nicholasville, KY. She was born on May 23, 1924 in Newport, KY, and was... View Obituary & Service Information

The family of Garnet Ruth Sears created this Life Tributes page to make it easy to share your memories.

Send flowers to the Sears family.