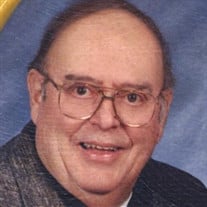 George William Lach, 86, of Falmouth, passed away on Saturday, May 18, 2019, at the Hospice of St Elizabeth Health Care in Edgewood, Kentucky. Born on December 8, 1932 in Pendleton County, he was the son of the late Clifford and Ottie Allender Lach. George was a 1951 graduate of Falmouth High School, and on June 8, 1952, he married his high school sweetheart, Jean Wagner. He ran a grocery in Falmouth during the 1950’s and 1960’s, offering delivery services in his Little Red Onion Delivery Truck. In the 1960’s he started working at CVG Airport with the Airmail, and when an opening at the Falmouth Post Office presented itself, he transferred back home and worked as a postman walking a daily mail route until the early 1990’s. After retiring from the post office, he ran GJ Vending until he was 70. Always offering a kind word and a helping hand, George had a servant’s heart. George was a lifetime member of the Falmouth United Methodist Church, a member of the Cincinnati Railroad Club, a past president and member of the Falmouth Rotary Club, a member of the Woodmen of the World Lodge #611, and a former member of the Falmouth City Council. George was a lifelong train enthusiast, with a working knowledge of all types of trains, and he especially enjoyed his visits and excursions with the Railroad Club. He is survived by four daughters: Diana (Mark) Faulhaber of Frankfort, Kentucky, Sandra ( Wayne) Hedrick of Weber City, VA, Susan (Joseph) Osbourn of Independence, Kentucky, and Leslie (Ian) Insko of Falmouth, Kentucky; 9 grandchildren: Jim Faulhaber, Nick Faulhaber, Allen Faulhaber, Katie Faulhaber Evans , Becca Faulhaber Joseph, Brian Hedrick, Scott Hedrick, Joshua Hedrick, and Ethan Baird; 11 great grandchildren: Heidi, Jenna, Simon, Isaac, Brody, Logan, and Zoey Faulhaber, Saul, Landon, and Matilda Joseph, and Alexandria Hedrick; and a host of extended family and friends. In addition to his parents he was preceded in death by his wife of 55 years, Jean Wagner Lach on July 24, 2007 and his son, John William Lach on June 17, 2006. Funeral services will be held at 11 am on Wednesday, May 22, 2019, at the Woodhead Funeral Home, Falmouth, with Rev. Brian Wilson officiating. The visitations will be from 4-8 pm on Tuesday, May 21, 2019, at the funeral home, and from 10-11 am on Wednesday preceding the service. Interment will take place in the Riverside Cemetery, Falmouth. Memorials are suggested to the Falmouth United Methodist Church Book of Remembrance: 230 W. Shelby Street, Falmouth, KY 41040. Online condolences may be sent to the family at www.woodheadfuneralhome.com

George William Lach, 86, of Falmouth, passed away on Saturday, May 18, 2019, at the Hospice of St Elizabeth Health Care in Edgewood, Kentucky. Born on December 8, 1932 in Pendleton County, he was the son of the late Clifford and Ottie Allender... View Obituary & Service Information

The family of George William Lach created this Life Tributes page to make it easy to share your memories.

George William Lach, 86, of Falmouth, passed away on Saturday,...

Send flowers to the Lach family.