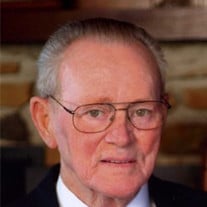 George Ross Latimer July 6, 1928 - February 16, 2010 George Ross Latimer, 81, of Falmouth, passed away on Tuesday, February 16, 2010, at his home. Born in Harrison County, Kentucky on July 6, 1928, he was a son of the late James Shirley and Kate Knox Latimer. He was raised by his aunt and uncle, Ruth and Forrest Dunn. On January 23, 1954, he married Marcella Ramsey, and his dear wife survives his passing. For 30 years he worked in the paint department at General Motors, and he was a well-known Pendleton County farmer. He was a member of the Plum Creek Christian Church, Campbell County, a member of the Aspen Grove Lodge #397 F & A M in Alexandria, Kentucky, a U.S. Navy veteran of World War II, and a U.S. Army veteran of the Korean Conflict. In addition to his parents, he was preceded in death by two brothers: James Harvey Latimer and Albert Latimer, and two sisters: Annie Risselman and Lucille Latimer. In addition to his wife of 56 years, Marcella Latimer, he is survived by two daughters: Joan Latimer- Murphy (Kelse) of DeMossville, Kentucky and Pam Latimer of Butler, Kentucky; one sister, Katherine Garrison of California, Kentucky; and a host of extended family and friends.

The family of George Ross Latimer created this Life Tributes page to make it easy to share your memories.

Send flowers to the Latimer family.