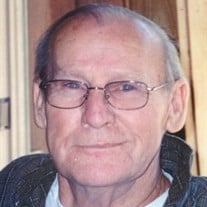 Gordon Lee “Butch” Roberts, 74, of Cynthiana, KY, passed away on Monday, August 18, 2014 , at his home. Born in Pendleton County, KY, on December 1, 1939, he was a son of the late Floyd Roberts and Marie Barnette Roberts Parsons. A retired General Motors employee, he was a member of the Elks Lodge in Cynthiana. He is survived by 7 children: Sandy Barker of Falmouth, KY, Gordon Roberts, Jr. of Cynthiana, KY, Brad Roberts of Cynthiana, KY, Kathy Roberts of Paris, KY, 1SG Chris Roberts of Ft. Leonard Wood, MO, Jennifer Roberts of Cynthiana, KY and Tina King of Cynthiana, KY; 17 grandchildren; 29 great grandchildren; 3 great great grandchildren; 2 sisters: Jean Edwards of Foster, KY and Mary Hogan of Butler, KY; 2 brothers: Earl Roberts of California and Donald Roberts of London, KY; and a host of extended family and friends. The funeral service will be held at 3 pm on Wednesday, August 20, 2014, at the Woodhead Funeral Home, Falmouth. The visitation will be from 12-3 pm on Wednesday preceding the service at the funeral home. Interment will take place in the Riverside Cemetery, Falmouth. Memorials are suggested to the charity of one’s choice.

The family of Gordon Lee 'Butch' Roberts created this Life Tributes page to make it easy to share your memories.