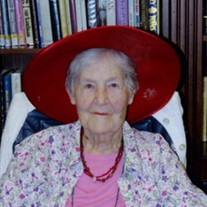 Grace Kirby Brooks, 92, of Falmouth, KY, passed away on Thursday, January 15, 2015, at the Cedar Ridge Health Campus in Cynthiana. Born in Pendleton County, KY on April 20, 1922, she was a daughter of the late William Joseph and Sarah Elizabeth... View Obituary & Service Information

The family of Grace Kirby Brooks created this Life Tributes page to make it easy to share your memories.

Grace Kirby Brooks, 92, of Falmouth, KY, passed away on Thursday,...

Send flowers to the Brooks family.