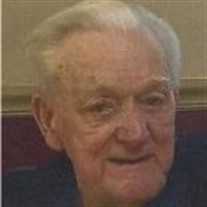 Howard “Babe” Gooden, 93, of Cincinnati, Ohio, formerly of Harrison County, passed away on Thursday, November 30, 2017, at the Continental Manor in Blanchester, Ohio. Born in Harrison County on July 8, 1924, he was a son of the late Luke and Emma Knox Gooden. He married Wanda Ruth Gooden, and his dear wife of 51 years preceded him in death on October 2, 1998. Howard worked in maintenance at the Village of Elmwood, and he faithfully served his country in the U.S. Army during World War II. He was a member of the Berry Christian Church. He is survived by his daughter, Beverly Busch of Fayetteville,OH; his three sons: Jerry Gooden of Maineville, OH, Charles Gooden, and Terry Gooden, both of Columbia, KY; 4 grandchildren: Carrie Gregory, Keira Gooden, Cody Gooden, and Caitlin Gooden; 1 great granddaughter, Emma Gregory; 1 great grandson, Luke Gregory; and 1 great great grandson who was born on his birthday, Clayton Gregory; and a host of extended family and friends. In addition to his parents and wife, he was preceded in death by a great grandson, Aiden “Gus”. Funeral services will be held at 2 pm on Saturday, December 2, 2017, at the Woodhead Funeral Home, Falmouth, with Bro. Dale Beighle officiating. Visitation will be from 12-2:00 pm preceding the service at the funeral home. Interment will take place in the Turner Ridge Cemetery, Pendleton County. Memorials are suggested to the Alzheimer’s Association: 644 Linn Street, Suite 1026, Cincinnati, OH 45203.

The family of Howard "Babe" Gooden created this Life Tributes page to make it easy to share your memories.

Send flowers to the Gooden family.