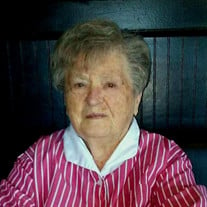 Irene Hardy Aulick Hargett, 91, of Falmouth, KY, passed away on Sunday, November 4, 2018, at the Johnson Mathers Nursing Home in Carlisle, KY. Born on November 15, 1926 in Bracken County, KY, she was a daughter of the late Samuel Kelsie and Alice Louise Marshall Hardy. A graduate of Brooksville High School, Irene worked as a nurse’s aid at the former St. Luke Hospital East in Ft. Thomas and managed the bookmobile through the Pendleton County Public Library. In the early years of her life she farmed, raised her family, served as president of the PTA and volunteered in numerous school and community functions, and organized efforts to establish and support the Pendleton County Library. Irene attended the Falmouth United Methodist Church, and she was a member of the Pendleton County Senior Citizens. She is survived by two daughters: Deborah Charlene Aulick of Ruther Glen, VA and Marene Elaine Aulick (Cathy Fisher) of Roanoke, VA; two grandchildren: Jodi Lynn Wilson and Scott Wilson; her sister Lelia Payne of Aberdeen, OH; 2 great grandchildren: Nathan William Wilson and Kendall Rose Wilson her loving companion George Lach of Falmouth, KY; several nieces and nephews; and a host of extended family and friends. In addition to her parents, she was preceded in death by a daughter Rena Carol Aulick-Lynn on January 30, 2016; a sister Wanda Ginn; a brother Roscoe Hardy; and a half-sister, Helen Hopkins. Funeral services will be held at 1 pm on Friday, November 9, 2018, at the Woodhead Funeral Home, Falmouth, with Bro. Brian Wilson officiating. The visitation will be from 11:30 – 1:00 p.m. on Friday preceding the service at the funeral home. Interment will take place in the Mt. Zion Cemetery. Memorials are suggested to NDRF (National Dysautonomia Research Foundation): P.O. Box 301, Red Wing, MN 55066-0301 (www.ndrf.org/contributions) to help with research and patient aid for people with MSA (Multiple System Atrophy), the disease which claimed the life of her beloved first daughter. Online condolences may be sent to the family at www.woodheadfuneralhome.com

Irene Hardy Aulick Hargett, 91, of Falmouth, KY, passed away on Sunday, November 4, 2018, at the Johnson Mathers Nursing Home in Carlisle, KY. Born on November 15, 1926 in Bracken County, KY, she was a daughter of the late Samuel Kelsie and... View Obituary & Service Information

The family of Irene Hardy Aulick Hargett created this Life Tributes page to make it easy to share your memories.