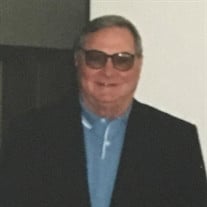 Jack Royster Smith, 90, passed away on Monday, July 15, 2019 at the St. Elizabeth Hospital in Edgewood, KY. Born on May 18, 1929 in Henderson County, KY, he was a son of the late Murray Hickman and Fannie Breshear Smith. On November 24, 1955 he married Carletta Wolfe and she preceded him in death on June 16, 1998. Jack attended the University of KY and was a veteran of the United States Navy, having served as a radioman from 1950-54. He was retired from General Electric, where he spent 33 years as a test engineer in the Development and Engineering dept. He loved to play golf and was a knowledgeable and big fan of UK Basketball. He is survived by a daughter; Jackie Kyle of Villa Hills, KY, a grandson; Eric (Sarah) Kyle of Villa Hills, KY, and a great granddaughter; Ella Grace Kyle. In addition to his wife Carletta, he was preceded in death by a sister; Sarah Lee Roth and 5 brothers; Oscar B., Kitchell, Elliott, Hatchett, and Dick Smith. Graveside services will be held at 12:00 Noon on Wednesday, July 24, 2019 at Riverside Cemetery in Falmouth, KY with Bro. Cohen Copley officiating. Burial will immediately follow. The visitation will be held from 11-11:45 A.M. at Woodhead Funeral Home in Falmouth. Memorial contributions are suggested to the American Diabetes Association: 8604 Allisonville Rd Suite 140, Indianapolis, IN 46250

The family of Jack R Smith created this Life Tributes page to make it easy to share your memories.

Send flowers to the Smith family.