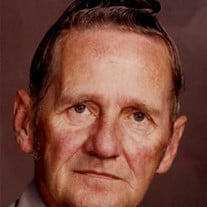 James Lewis “Louie” Calvert, 81, of Berry, KY, passed away on Monday, December 21, 2015 at the Care Center at Kenton Pointe in Maysville, KY. Born on June 16, 1934 in Campbell County, KY, he as a son of the late Austin Minnish and Corrine Whitaker Coghill Calvert.   On December 29, 1956, he married Elizabeth Ann Marquardt Calvert, and his wife of 44 years preceded him in death on December 30, 2000.   “Louie” retired as a foreman with the Davey Tree Company after 27 years of service. Formerly, he served as Pendleton County Jailer for 10 years and as a Transportation Officer for 6 years.   He was a member of the Morgan Christian Church, Pendleton County. In addition to his wife and parents, he was preceded in death by a daughter, Cynthia Jean Calvert Clos on May 17, 2013, his son-in-law, Darren Lee Smith on December 4, 2015; and his brother, Billy Calvert. He is survived by one son, Roger Lewis (Beverly) Calvert of Berry, KY; two daughters:   Regina Lee Calvert (Dale) Gentry of Berry, KY and Julia Ann Calvert Smith of Springfield, OH; 3 grandsons: Thomas Wayne Keeton, James Derrick “JD” Gentry, and Jerad Dale Gentry; 4 great grandchildren; and 3 step great grandchildren; one brother, Raymond “Dutch” Calvert of Butler, KY; his brother-in-law, Charles Allan “Tinker” Marquardt of Falmouth, KY; and a host of extended family and friends. The funeral service will be held at 2 p.m. on Sunday, December 27, 2015, at Woodhead Funeral Home, Falmouth, with Bro. Don Mays officiating. Interment will take place in the Morgan Cemetery, Pendleton County.  The visitation will be from 5-8 pm on Saturday, December 26, 2015, at the funeral home.   Memorials are suggested to the Hospice of Hope, 909 Kenton Station Drive, Maysville, KY 41056.

The family of James Lewis 'Louie' Calvert created this Life Tributes page to make it easy to share your memories.