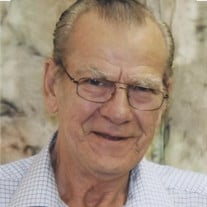 Jerome “Jerry” Wayne Milner, 75, of Alexandria, formerly of Harrison County, KY, passed away on Sunday, February 14, 2016, at his home. Born in Harrison County on August 26, 1940, he was one of 10 children born to the late Everett and Pearlie Cloe Milner. A 1958 graduate of Harrison County High School, Jerry married Sandra Sue Metzger on January 27, 1962, and his dear wife survives his passing.   He owned and operated Milner Electric Service in Alexandria, served as a Deacon and Elder at the Church of Christ of Alexandria, having been a member since 1968, and also served in the U.S. Army.   Jerry was an avid UK Wildcat fan, and he loved spending time with his family and friends, and in service to his church. In addition to his wife of 54 years, “Susie” Metzger Milner, he is survived by two sons: Mark Wayne Milner of Nashville, TN and Joel Alan Milner of Alexandria, KY; one brother, William “Bill” Milner, of Berry, KY; and a host of extended family and friends. In addition to his parents, Jerry was predeceased by his daughter, Jeri Sue Milner on September 24, 1970; and 8 siblings: Geraldine Milner, Harold Milner, Edward Milner, Geneva Harney, Sylvia Irvin, Ray Milner, Randy Milner, and Audrey Milner.

The family of Jerome 'Jerry' Wayne Milner created this Life Tributes page to make it easy to share your memories.