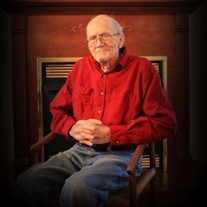 John I. Carr, 85, of Falmouth, KY, passed away on Thursday, January 8, 2015 at his home. Born on November 12, 1929, he was a son of the late Henry Edward and Lucy Lee Hammond Carr. On September 12, 1949 he married Doris Hammons and she survives his passing. He was a member and deacon of the Blanket Creek Baptist Church, a former Boy Scout Leader, member of the Lions Club, a retired machinist with Cincinnati Milacron, an avid golfer, a member of the Pendleton County Red Cross, which he helped to reorganize and reinstitute, and a KY Colonel. In addition to his wife; Doris Carr, he is survived by 5 children; Linda Porter, Brenda (Lynn) Booher, Johnny Ray (Evelyn) Carr, Jackie (Stuart) Stephens, and Steve (Vickie) Carr all of Falmouth, KY, 13 grandchildren, 28 great grandchildren, 4 great-great grandchildren, a sister; Geraldine Morhard of Philadelphia, PA, and a brother; David F. Carr of Warner Robbins, GA . He was preceded in death by a sister; Henrietta Burke and 2 brothers; James Thomas Carr and Paul Richard Carr. Funeral services will be held on Monday, January 12, 2015 at 11:00 A.M. at Woodhead Funeral Home in Falmouth with Bro. Joe Hall and Shane Hammons officiating. Burial will follow in the Mt. Vernon Cemetery. The visitation will be held on Sunday from 2-5:00 at the funeral home. Memorial contributions are suggested to the Blanket Creek Baptist Church: 5080 Broadford Rd, Falmouth, KY 41040.

The family of John I. Carr created this Life Tributes page to make it easy to share your memories.

Send flowers to the Carr family.