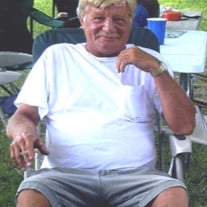 Johnny Ray LaFollette, 57, of Falmouth, KY, passed away on Friday, July 19, 2013, at his home. Born in Ft. Thomas, KY, on July 15, 1956, he was the son of Rosalee Rice LaFollette, and the late Carlos “Shorty” LaFollette. A 1974 graduate of Pendleton High School, he was a lifelong farmer. In addition to his father, he was preceded in death by a brother, Charles Donald “Charlie” LaFollette. In addition to his mother, Rosalee LaFollette of Falmouth, KY, he is survived by 3 sisters, Judy Hopkins of Falmouth, KY, Kathy (Larry) Turley of DeMossville, KY, and Margie (Kenny) Dunaway of Flemingsburg, KY; 4 brothers, Tom (Pat) LaFollette of Butler, KY, Bill LaFollette of Visalia, KY, Bob (Julia) LaFollette, and Kenny (Paula) LaFollette, both of Falmouth, KY; and a host of nieces, nephews, extended family, and friends. The funeral service will be held at 11:00 a.m. on Monday, July 22, 2013, at the Woodhead Funeral Home, Falmouth, with Marvin Sullivan officiating. The visitation will be from 3-8:00 p.m. on Sunday, July 21, 2013, at the funeral home. Interment will take place in the Riverside Cemetery, Falmouth. Memorials are suggested to the Hospice of Hope, 909 Kenton Station Drive, Maysville, KY 41056.

The family of Johnny Ray LaFollette created this Life Tributes page to make it easy to share your memories.

Johnny Ray LaFollette, 57, of Falmouth, KY, passed away on Friday,...

Send flowers to the LaFollette family.