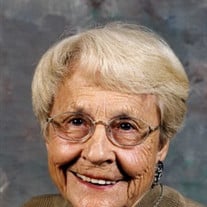 Lucille Ritter Abernathy, 93, of Cynthiana, formerly of Falmouth, Kentucky, passed away on Sunday, August 2, 2009, at the Cedar Ridge Health Campus in Cynthiana. Born on April 4, 1916 in Pendleton County, Kentucky, she was a daughter of the late William Jacob and Edna Hobday Ritter, Sr. On November 19, 1943, she married W. Prentice Abernathy, a CPA, in the Panama Canal Zone, and they established residence there for 30 years. While there, Lucille managed the commissary. On October 4, 1984, her husband preceded her in death. She worked at the former Shillito’s Department Store in Cincinnati, Ohio, and she was a member of the Falmouth United Methodist Church and a Kentucky Colonel. In addition to her parents and her husband, she was preceded in death by her brother, Wilbur Ritter, on July 10, 2008 and her sister, Ruby Doggett, on August 17, 2008. She is survived by her brother: William (Margaret) Ritter, Jr. of Falmouth, Kentucky; her sisters: Virgilene Moore and Mildred Showalter, both of Falmouth, Kentucky and Hazel Irene Hamm of Richmond, Indiana; and a host of extended family and friends. Funeral services will be held at 11:00 a.m. on Saturday, August 8, 2009, at the Woodhead Funeral Home, Falmouth. Serving as pallbearers will be her nephews: Mike Ritter, Robbie Vanlandingham, Gary Showalter, Larry Ritter, Tony Worrell, and Ron Mills. The honorary pallbearers will be Gary Price, Jim Gray, David Sydnor, Ronnie Case, Dick Hamm, Billy Browning,Todd Sydnor and Larry Morton. The visitation will be from 5-8:00 p.m. on Friday at the funeral home. Interment will take place in the Riverside Cemetery, Falmouth. Memorials are suggested to the Falmouth United Methodist Church, 230 W. Shelby Street, Falmouth, Kentucky 41040 or the Hospice of the Bluegrass, 506 E. Pike Street, Cynthiana, Kentucky 41031. Online condolences can be sent to the family at www.woodheadfuneralhome.com

Lucille Ritter Abernathy, 93, of Cynthiana, formerly of Falmouth, Kentucky, passed away on Sunday, August 2, 2009, at the Cedar Ridge Health Campus in Cynthiana. Born on April 4, 1916 in Pendleton County, Kentucky, she was a daughter of the... View Obituary & Service Information

The family of Lucille Ritter Abernathy created this Life Tributes page to make it easy to share your memories.

Send flowers to the Abernathy family.