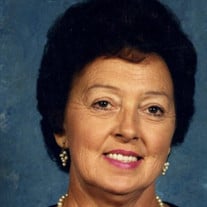 Lula Mae Kendall, 81, of Berry, KY, passed away on Monday, January 23, 2017, at the Harrison Memorial Hospital in Cynthiana. Born on June 7, 1935 in Owen County, KY, she was a daughter of the late Sam and Sally Lewis. On February 15, 1985, she married Bill Kendall, Sr., and her dear husband survives her passing. She was a homemaker and a member of the Colemansville Christian Church. In addition to her husband of 31 years, Billy, she is survived by her step son, Billy Kendall, Jr. of Cynthiana; her step-daughter, Mary Kendall of Cynthiana, KY; two step grandchildren: Bradley Kendall and Dylan Johnson; her nephew: Bill (Janice) Hon; her niece, Betty ( Forest) Osborne; several nieces and nephews; and a host of extended family and friends. In addition to her parents, she was preceded in death by 3 brothers and 5 sisters. Funeral services will be held at 2 pm on Thursday, January 26, 2017, at the Woodhead Funeral Home, Berry, with Bro. Terry McDuffey officiating. Serving as pallbearers will be Jerry Barnes, Billy Kendall, Jr., Leroy Spicer, Bill Hon, Ed Fogle, and H.A. Thompson. Adrian Faulkner will be an honorary pallbearer. The visitation will be from 12-2 pm preceding the service at the funeral home. Interment will take place in the Pythian Grove Cemetery, Berry.

The family of Lula Mae Kendall created this Life Tributes page to make it easy to share your memories.

Send flowers to the Kendall family.