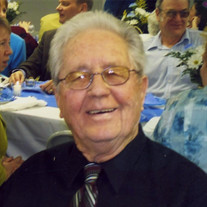 Myron Glyndon (Glyn) Blades was born to John Evan and Daisy Colvin Blades on January 7, 1921 and entered into the presence of the Lord on October 6, 2019, at the age of 98 years and 9 months. Glyn was preceded in death by his parents, as well as his brothers, Harold and Woodrow blades, and his sisters, Irene Lundrigan, Edith Abercrombie, and Nawanda Watts. On October 30, 1939, he was united in marriage to Beulah Sharp, and she preceded him in death on December 1, 1975. To this marriage two children were born –Ted (Kay) Blades and Janice (Tom) Wolfe, who both survive his passing. Glyn was joined in marriage to Millie Morford on June 14, 1981, and she survives his passing. Other survivors include grandchildren: Tammy Wolfe (Gran) Spicer, Troy (Sharon) Wolfe, and Steve (Paula) Blades; great grandchildren, Jacqueline and Erin Blades, Matt (Kelly) Wolfe, Travis (Brittany) Wolfe, and Evan Spicer; and great-great grandson, Ryan Lee Wolfe, and he was anxiously awaiting the birth of a great-great granddaughter, Jayden Wolfe. Glyn loved the Lord and he often remarked that he was thankful his late wife, Beulah, led him to the Lord. He was a member of the Pine Grove United Methodist Church, and he enjoyed the beauty of nature and the creatures God created. Some of his happiest times were sitting on the porch looking over the beautiful hillsides. Imagine the beauty he is now enjoying! Funeral services will be held at 2 pm on Thursday, October 10, 2019 at the Woodhead Funeral Home, Falmouth, with Carol Mains, Rhonda Fields and Bro. David Hartkopf officiating. The visitation will be from 4-8 pm on Wednesday, October 9, 2019, at the funeral home. Interment will take place in the Riverside Cemetery, Falmouth. Memorials are suggested to the Hospice of Hope: 909 Kenton Station Drive, Maysville, KY 41056, the Pendleton County Animal Shelter: 1314 Bryan Griffin Road, Butler, KY 41006, Christ to the World: CTTW Ministries, P.O. Box 360, Judson, TX 75660, or the charity of one’s choice.

Myron Glyndon (Glyn) Blades was born to John Evan and Daisy Colvin Blades on January 7, 1921 and entered into the presence of the Lord on October 6, 2019, at the age of 98 years and 9 months. Glyn was preceded in death by his parents, as... View Obituary & Service Information

The family of Myron Glyndon "Glyn" Blades created this Life Tributes page to make it easy to share your memories.

Send flowers to the Blades family.