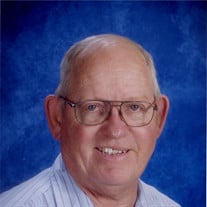 Orla Whitaker, 79, of Berry, KY, passed away on Monday, September 24, 2018, at his home. Born on June 27, 1939 in Harrison County, KY, he was a son of the late Arthur Clark and Lizzie Earle Courtney Whitaker. He was a member of the Berry Baptist Church Orla worked as a custodian for Northside Elementary for 39 years and 5 years for the Board Of Education He worked as a mechanic for Fuller Ford in Falmouth, ky. and as a Tobacco farmer Drafted into the U.S. Army, Orla faithfully served his country during the Vietnam War and Berlin Crisis. He married Helen Jean Billiter, and his dear wife survives his passing. From the age of 17, Orla worked with the Berry Volunteer Fire Department, serving as Fire Chief for 45 years, until his retirement in November of 2017after 61 years of service.He was mayor for Berry, ky for 8 years serving 2 terms Two daughters: Patricia Diane Fisher of Goshen, OH and Teresa Lynn Tumey of Berry; one son, Billy Ray Whitaker of Berry, KY ; 7 grandchildren: McKindree Jarrod Perrin, Brittany Lynn Murphy, Jarrod Wayde Garrison, Justin Dale Cole, Kristyn Fisher, Dustyn Fisher, and Austin Tumey; 14 great grandchildren: Braxton Carter, Freya Lynn, Kelsey, Kayla Jamie, Tanum, Alex, Colton, Jayden, Brentley, Keryssa, Great great grandchildren Roman, Aryreh, and Brayella; two sisters: Bonnie Milner and Jo Ella Cope, both of Berry; two brothers: Arthur Layne Whitaker of Berry and Allen Whitaker of Butler; and a host of extended family and friends. In addition to his parents, he was preceded in death by his great great grandson, Bryson. Funeral services will be held at 10:00 a.m. on Friday, September 28, 2018 at the Woodhead Funeral Home, Berry. The visitation will be from 5-8:00 p.m. on Thursday at the funeral home. Interment will take place in the Pythian Grove Cemetery, Berry with full military honors by the Hardin- Browning Post #109. The Last Call will be conducted by the Berry Volunteer Fire Department. Memorials are suggested to the Berry Fire Department: 103 S. Second Street, Berry, KY 41003 Online condolences may be sent to the family at www.woodheadfuneralhome.com

Orla Whitaker, 79, of Berry, KY, passed away on Monday, September 24, 2018, at his home. Born on June 27, 1939 in Harrison County, KY, he was a son of the late Arthur Clark and Lizzie Earle Courtney Whitaker. He was a member of the Berry... View Obituary & Service Information

The family of Orla Whitaker created this Life Tributes page to make it easy to share your memories.

Orla Whitaker, 79, of Berry, KY, passed away on Monday, September...

Send flowers to the Whitaker family.