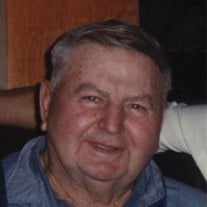 Orville Ingram July 1, 1915 - January 21, 2012 Orville Ingram, 96, of Berry, passed away on Saturday, January 21, 2012, at Elm Croft in Florence, KY. Born on July 1, 1915 in Harrison County, Kentucky, he was the son of the late Hiram and Hattie Anna McNeese Ingram. He was a retired farmer, a member,Elder, and a former Sunday School teacher at the Berry Christian Church, and a former 4-H leader. On December 22, 1937, he married Alice Eliza Kendall Ingram, and his dear wife of 73 years preceded him in death on August 12, 2011. In addition to his parents and wife, he was preceded in death by his daughter, Lena Sue Ingram on May 1, 1940, his granddaughter, Kathy Shanklin on January 29, 2011; and three brothers: Leland, Eugene, and Hayward Ingram. He is survived by two daughters: Sandra (Parker) Fryman of Burlington, Kentucky and Wayne Ann (Van) Shanklin of Berry, Kentucky; 5 grandchildren: Dwayne Shanklin, Taffie Conner, Penny Davis, Scott Fryman, and Troy Fryman; 13 great grandchildren; 1 great great grandchild; his sister, Thelma Million of Lexington, Kentucky; and a host of extended family and friends. Funeral services will be held at 12:00 noon on Friday, January 27, 2012, at the Berry Christian Church, 320 Main Street, Berry, Kentucky 41003, with Bro. Randy Wilson and Bro. L.D. Campbell officiating. The visitation will be from 5-8:00 p.m. on Thursday, January 26, 2012, at the Woodhead Funeral Home, 106 Main Street, Berry, and from 11-12:00 noon on Friday preceding his service at the Berry Christian Church. Interment will take place in the Pythian Grove Cemetery, Berry. Memorials are suggested to the Berry Christian Church Building Fund, 320 Main Street, Berry, Kentucky 41003, or Hospice of the Bluegrass, 1317 U.S. Highway 62 E., Cynthiana, Kentucky 41031.

The family of Orville Ingram created this Life Tributes page to make it easy to share your memories.

Send flowers to the Ingram family.