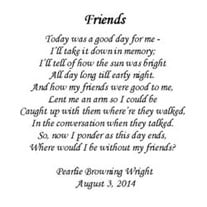 Pearlie Jane Browning Wright, 91, of Falmouth, KY, passed away on Thursday, August 6, 2015, at the Care Center at Kenton Pointe in Maysville, KY. Born on February 19, 1924 in Pendleton County, she was a daughter of the late Kenzie and Hilda Blasingame Browning. She married Ralph Wright, and her husband preceded her in death on March 17, 2008. Pearlie was known for her poetry and her willingness to help others. Many a person and occasion in our community have been celebrated with her gift of poetry. Always capturing the spirit of the person or the event with her insight, wit, and humor, Pearlie’s writing was inspired, and it will be cherished by her family and friends. She was a homemaker and the oldest living member of the Oakland Christian Church, Pendleton County, where she was a member of the Oakland Christian Workers and the Joy Bounds. Pearlie belonged to the Camp Northward Corporation, the Democratic Women’s Club, the Four Oaks Homemakers (with 38 years of perfect attendance and over 9000 Homemaker Community Service Hours), and she served on the Homemaker Council and the Kincaid Regional Theater Board. Twice she was named a Kentucky Colonel. In addition to her parents and husband, she was preceded in death by 2 sisters: Ruby Hays and Ramona Buckley; and 2 brothers: Billy Browning and Bobby Comer Browning. She is survived by 5 children: “ Pete” Ralph (Karen) Wright of Maysville, KY, Jerry Wright of Falmouth, KY, Jim (Darlene) Wright of Butler, KY, Tony Wright of Falmouth, KY, and Linda (Steve) Mulloy of Falmouth, KY; 13 grandchildren; 20 great grandchildren; 2 sisters: Fern (Ralph) Workman of Dry Ridge, KY and Pat (Richard) Colvin of Falmouth, KY; 1 brother, Tom (Candy) Browning of Butler, KY; several nieces and nephews; and a host of extended family and friends. The funeral service will be held at 11 a.m. on Monday, August 10, 2015, at Woodhead Funeral Home, Falmouth, with Bro. Jim Flaugher officiating. The visitation will be from 3-8 pm on Sunday at the funeral home. Interment will take place in the Mt. Vernon Cemetery, Pendleton County. Memorials are suggested to the Oakland Christian Church, 149 Oakland Church Road, Falmouth, KY 41040 or the charity of one’s choice.

Pearlie Jane Browning Wright, 91, of Falmouth, KY, passed away on Thursday, August 6, 2015, at the Care Center at Kenton Pointe in Maysville, KY. Born on February 19, 1924 in Pendleton County, she was a daughter of the late Kenzie and Hilda... View Obituary & Service Information

The family of Pearlie Jane Browning Wright created this Life Tributes page to make it easy to share your memories.