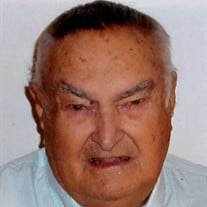 Raymond (Ray) Arnold Baumgartner, 92, of Falmouth, passed away on Thursday, March 28, 2013, at his home. Born on December 14, 1920 in Pendleton County, KY, he was a son of the late Henry and Daisy Cox Baumgartner. On October 11, 1947, he married Thelma Miller, and his dear wife survives his passing. A lifelong Pendleton County farmer, Ray was also a butcher at Wyatt’s Super Value in Falmouth. He was a deacon of the Turner Ridge Baptist Church, Pendleton County. In addition to his parents, he was preceded in death by a sister, Ruth Kliebecker. In addition to his wife of 65 years, Thelma, he is survived by three children: Mike Baumgartner of Florida, Jeff (Christy) Baumgartner and Karen Carr, both of Falmouth. He was a grandfather to 8 and a great grandfather to 11. He is also survived by two sisters, Betty Chapman and Ann Baumgartner, both of Falmouth; and a host of extended family and friends. The funeral service will be held at 2:00 p.m. on Monday, April 1, 2013, at the Turner Ridge Baptist Church, 60 McGraw Road, Falmouth, KY 41040, with Bro. Dale Beighle and Bro. Fred Workman officiating. The visitation will be from 11-2:00 p.m. on Monday preceding the service at the church. Serving as pallbearers will be James Smith, Terry Sowder, Fred Brown, Doug Boden, Jamie Carr, Caleb Baumgartner, Lonnie Gregg, and Brandon Gregg. The honorary pallbearers will be George Parsons and Bill Thomas. Special music will be shared by Lonnie and Regina Gregg. Interment will take place in the Turner Ridge Cemetery, Pendleton County. Memorials are suggested to the Turner Ridge Baptist Church or Disaster Assistance Church of Christ, www.disasterassistancecoc.com.

The family of Raymond Arnold Baumgartner created this Life Tributes page to make it easy to share your memories.

Send flowers to the Baumgartner family.