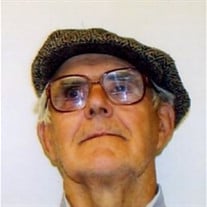 René-Henri Capon, 89, of Falmouth, KY, passed away on Thursday, January 15, 2015, at the River Valley Nursing Home in Butler. Born in Banteux, France on February 21, 1925, he was the son of the late Henri and Marie Capon. On October 17, 1947, he married Marguerite Berton Capon, and his dear wife of 63 years preceded him in death on September 28, 2011. René was a plater with American Standard for 10 years, an employee with Interlake Steel for 10 years, and a member of the St. Francis Xavier Church in Falmouth. Before the liberation of France, he served in the French Military and was captured as a prisoner of war. He and his late wife, Marguerite, worked together to aid American soldiers in France’s underground movement during the war. He is survived by four children: William Dominque (Lela) Capon, Jacques Henri Capon, Marguerite Marie (John) Cox, and Jean Paul Capon, all of Falmouth; 6 grandchildren: Gina (Mark), Carrie (Larry), Jill, Joy (Jason), Stephen (Catherine), and Anthony; 4 great grandchildren: Jacob, Mark III, Joseph, and Samuel; and a host of extended family and friends. Mass of Christian Burial will be held at 12 noon on Saturday, January 17, 2015, at St. Francis Xavier Church, 202 Second Street, Falmouth, KY 41040, with Rev. Joseph Shepherd officiating. The visitation will be from 10-12 noon at his church preceding the mass on Saturday. Interment will take place in the St. Francis Xavier Cemetery. Memorials are suggested to the Knights of Columbus Chapter #14728, 202 Second Street, Falmouth, KY 41040.

The family of Ren created this Life Tributes page to make it easy to share your memories.

Send flowers to the family.