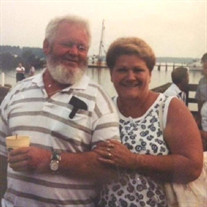 Richard Thomas Cooper, 82, of Falmouth, KY, passed away on Friday, March 19, 2021 at his home. Born on January 4, 1939 in Falmouth, KY, he was a son of the late Elbert Thomas and Helen Routt Cooper . On November 7, 1960 he married Paula K. Cookendorfer Cooper, and they shared 59 years of marriage before she preceded him in death on Dec. 19, 2019. Richard, (also known as “Coop”) worked for 20 years as a self-employed plumber. At 13 years of age and eager to learn, he started working with local plumber Cliff Bonar, where he gained valuable experience. He also worked as a pipefitter with Automatic Sprinkler and Fire Protection for many years. All the while, Richard would help any family or friend who had a need, always willing to devote the time and energy to solve the problem at hand. Richard attended the Chapel of Praise in Falmouth, and he was a member of the Pendleton County Sportsman’s Club in Butler. Richard was all about family and he took wonderful care of his late wife and best friend Paula. His devotion to her was inspiring and with his help and labor of love, she was able to stay at home with many health challenges. He is survived by two children: Kimberly J. Cooper Eichmann and Richard R. Cooper , both of Falmouth, KY; four grandchildren: Nicholas Eichmann of Alexandria, KY, Cory T. Cooper, Rebecca T. Cooper, and Elizabeth M. Cooper, all of Georgetown, OH; two great grandchildren: Robbie Eichmann and Carter Cooper; his brother, Charles Cooper and two sisters: Joyce Toliver and Sandra Toomey, all of Pendleton County; and a host of extended family and friends. In addition to his wife and parents, he was also preceded in death by two sisters: Nellie Clos and Ruby Cole. A Celebration of Life for Richard and Paula Cooper will be held at 7 pm on Tuesday, March 30, 2021 at Woodhead Funeral Home, Falmouth, with Bro. Kevin Clos officiating. Friends and family are invited to gather from 5-7 pm preceding the service at the funeral home. Interment will take place privately in the Riverside Cemetery, Falmouth. Memorials are suggested to the Chapel of Praise: 1562 Highway 159N, Falmouth, KY 41040.

The family of Richard Thomas Cooper created this Life Tributes page to make it easy to share your memories.

Richard Thomas Cooper, 82, of Falmouth, KY, passed away on Friday,...

Send flowers to the Cooper family.