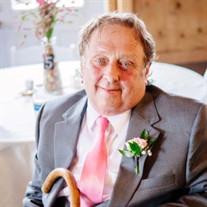 Ricky K. Moore, 62, of Falmouth, KY, passed away on Wednesday, January 8, 2020, at the St. Elizabeth Health Care in Edgewood. Born in Ft. Thomas, KY on December 11, 1957, he was the son of the late Bertis and Anna McDowell Moore. A 1975 Pendleton High School graduate, Ricky worked for 34 years as a truck driver for Pepsi (1976-2010). He enjoyed growing up on the family farm where he raised tobacco, and hay with his cattle. He enjoyed growing a garden and planting flowers. In his retirement, Ricky loved taking care of his dog Porter and his two cats Hellert and Sparkle and spending time with his family. He is survived by three children: Shannon Moore (Tim) Wells and Jeremy Moore, both of Falmouth, KY and Jessica Moore (Jonathan) Muench, of Cold Spring, KY; four grandchildren: Avery Booth, Brett Booth, Caroline Moore and Colten Moore; two cousins: Judge Executive Gary Wayne (Linda) Moore of Burlington, KY and Kathie Moore Moreland of Falmouth, KY; and a host of extended family and friends. In addition to his parents, he was preceded in death by his cousin, Karl Glenn Moore on July 11, 2019, his maternal grandparents Stella and Jesse McDowell; and his paternal grandparents, Clay and Katie Moore. Funeral services will be held at 4 pm on Sunday, January 12, 2020 at Woodhead Funeral Home, Falmouth. The visitation will be from 1-4 pm on Sunday, preceding the service at the funeral home. Interment will take place at 10:30 a.m. on Monday, January 13, 2020 in the Riverside Cemetery, Falmouth. Memorials are suggested to the Pendleton County Animal Shelter: 1314 Bryan Griffin Road, Butler, KY 41006.

The family of Ricky K. Moore created this Life Tributes page to make it easy to share your memories.

Send flowers to the Moore family.