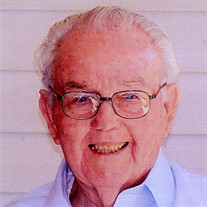 Shelby McDowell, 93, of Falmouth, KY, passed away on Saturday, August 25, 2018 at the Hospice of St. Elizabeth Health Care in Edgewood, KY. Born on November 2, 1924 in Neave, Kentucky, he was the youngest of four sons born to the late Theodore and Bertha Routt McDowell. Drafted when he was junior in high school, Shelby faithfully served his country in the U.S. Army during World War II. Upon returning from the service, he earned his high school diploma and started his 58 year career in the grocery business. He co-owned and operated the former Leadway Grocery in Falmouth. Next, he started working as a butcher at the former Locker Grocery in Falmouth. From there, he became the head butcher and a co-owner at the former Bi-Rite IGA in Falmouth, where he worked for over 36 years. After the 1997 flood, Shelby joined Wyatt’s Super-Valu in Falmouth, from which he retired after 10 years of service. Throughout his adult life, Shelby worked as an associate with the Woodhead Funeral Homes in Falmouth and Berry, where his kind and compassionate manner helped to comfort many families. Shelby attended the Falmouth Wesleyan Church and St. Francis Xavier Church. He was a member of the Hardin- Browning Post #109, where he served as Chaplain for 29 years. Shelby was a former member of the Falmouth Volunteer Fire Department, a Kentucky Colonel, and a member of the Catholic Order of Foresters. Known for his kind words and deeds, Shelby lived his faith every day, seeking ways to help others and to support the community. To honor his extraordinary contributions, Pendleton County honored him and designated June 7, 2014, as “Shelby McDowell Day.” He married the late Mabel Austin McDowell and his wife of 34 years preceded him in death on March 21, 1977. On October 10,1981, he married Norma Wells McDowell, and his wife of 36 years survives his passing In addition to his wife, Norma, he is survived by two sons: Tom McDowell of Erlanger, KY and Mike (Kathy) McDowell of Falmouth, KY; three step-children: Sue (Paul) Sullivan of Butler, KY, Joyce (Mike) Schlueter of Falmouth; and Eddie (Brenda) Wells of Falmouth, KY; 18 grandchildren; several great grandchildren; and several great great grandchildren; his son-in-law, Charles Allan “Tinker” Marquardt, Sr. of Falmouth, KY; his daughter-in-law, Mary McDowell of Falmouth, KY; and a host of extended family and friends. Shelby was also preceded in death by his son, Kenneth Wayne McDowell on July 18, 2005; his daughter Vivian Elaine McDowell Marquardt on April 19, 2011; his daughter-in-law, Brenda Raye McDowell on December 3, 2011; and his three brothers: Gene, Paul, and Cecil McDowell. Funeral services will be held at 1 pm on Saturday, September 1, 2018, at the Woodhead Funeral Home, Falmouth, with Mike McDowell, Tom McDowell, and Bro. Nick Errico officiating. The visitations will be from 3-8 pm on Friday, August 31, 2018 and from 11-1 pm on Saturday preceding the service at the funeral home. Interment will take place in the St. Francis Xavier Cemetery, Falmouth, with full military honors by the Hardin-Browning Post #109. In lieu of flowers, ,memorials are suggested to the Falmouth Wesleyan Church Building Fund: 416 Monument Street, Falmouth, KY 41040, the Hardin-Browning Post #109: 111 Montjoy Street, Falmouth, KY 41040 ; or the Hospice of St. Elizabeth Health Care: 483 S. Loop Road, Edgewood, KY 41017.

Shelby McDowell, 93, of Falmouth, KY, passed away on Saturday, August 25, 2018 at the Hospice of St. Elizabeth Health Care in Edgewood, KY. Born on November 2, 1924 in Neave, Kentucky, he was the youngest of four sons born to the late Theodore... View Obituary & Service Information

The family of Shelby McDowell created this Life Tributes page to make it easy to share your memories.

Shelby McDowell, 93, of Falmouth, KY, passed away on Saturday,...

Send flowers to the McDowell family.