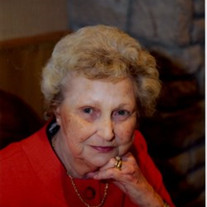 Shirley Mae Race April 11, 1939 - May 21, 2015 Shirley Mae Baker Race, 76, of Butler, KY, passed away on Thursday, May 21, 2015 at her home. Born on April 11, 1939 in Pendleton County, KY, she was a daughter of the late Tilford and June Kidder Baker. On September 13, 1975 she married David Race and he survives her passing. She was a homemaker and member of the Butler Baptist Church. In addition to her husband David, she is survived by 7 children; Sharon Napier, Karen Dotson, Cheryl Hamilton, Richard Poe, Carol Mess, Candy Poe, Crystal Sorrell, 15 grandchildren, 23 great grandchildren, and 2 brothers; Gary Baker and Ronnie Baker. She was preceded in death by a son; James Poe Jr., and a brother; Bobby Baker.

The family of Shirley Mae Race created this Life Tributes page to make it easy to share your memories.

Send flowers to the Race family.