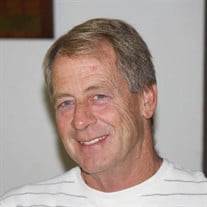 Stephen Phillip Wood, 57, of Falmouth, KY, passed away on Sunday, December 16, 2018, at his home. Born on January 3, 1961 in Ft. Thomas, KY, Steve was the son of Phillip Wood and the late Nancy Lee Gulick Harville. A 1979 graduate of Pendleton High School, Steve worked at the Receiving Station in Maysville for over 20 years, and he started building barns with his father-in-law, Melvin Wright in 1982. On November 3, 1979, he married Dawn Wright, his dear wife and best friend survives his passing. Together, they created and operated Southern Ties for the last four years. Steve was a faithful member of the Morgan Christian Church, where he led worship for many years. Steve’s journey was an inspiration. His genuine, loving spirit will always be remembered by those who knew him. In addition to his wife of 39 years, Dawn, he is survived by three children: Casey Wood-Croley (Matt) of Peach Grove, KY, Megan Wood-Ramsey and Mason Wood (Courtney) , both of Falmouth, KY; grandchildren: Cohen Croley, Bryce Croley, and Blaike Ramsey; two brothers, Rick Wood (Donna) and Trey Wood; one sister, Brianna Wood, his mother and father-in-law, Melvin and Reta Wright of Falmouth, KY; several nieces and nephews; his Morgan Christian Church family, and a host of extended family and friends. In addition to his mother, Nancy, Steve was preceded in death by his grandparents, Richard and Ava Lou Gulick. Funeral services will be held at 11 am on Wednesday, December 19, 2018, at Woodhead Funeral Home, Falmouth, with Duke Wilmes and David Wu officiating. Interment will follow in the Morgan Cemetery, Berry. A Celebration of Life will be held starting at 1:00 p.m. on Wednesday, December 19, at the Kincaid Lake State Park Multi-Purpose Building. In lieu of flowers, memorials are suggested to the Morgan Christian Church, Hospice of Hope, or the Miracle Point Playground.

Stephen Phillip Wood, 57, of Falmouth, KY, passed away on Sunday, December 16, 2018, at his home. Born on January 3, 1961 in Ft. Thomas, KY, Steve was the son of Phillip Wood and the late Nancy Lee Gulick Harville. A 1979 graduate of Pendleton... View Obituary & Service Information

The family of Stephen Phillip Wood created this Life Tributes page to make it easy to share your memories.

Stephen Phillip Wood, 57, of Falmouth, KY, passed away on Sunday,...

Send flowers to the Wood family.