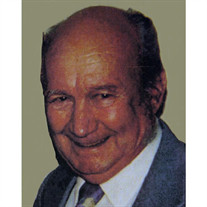 Wallace Coleman Browning, Jr., 95, of Cynthiana, KY, formerly of Falmouth, passed away on Thursday, May 5, 2022, at the Cedar Ridge Health Campus in Cynthiana. Born on September 9, 1926 in Pendleton County, KY, he was a son of the late Wallace Coleman and Ethel Kearns Browning, Sr. On March 18, 1950 he married Irene Mae Biddle Browning, and his dear wife of 70 years preceded him in death on January 12, 2021. For over 20 years, Wallace worked as rural mail carrier with the United States Postal Service, retiring at the age of 67. Formerly, he worked at Fuller’s Manufacturing in Falmouth for 17 years. Wallace faithfully served his country in the U.S. Army during World War II. He was a member of the Falmouth United Methodist Church and the Hardin-Browning Post #109, where he served as finance office for 12 years. Together, he and Irene always kept their family and their faith at the center of their lives. He is survived by two sons: Ron (Linda) Browning of Falmouth, KY and Kevin (Pat) Browning of Berry, KY; his daughter-in-law, Dee Browning, of Falmouth, KY; 5 grandchildren: Ronnie Browning, Tracy Straus, Steven Browning, Derek Browning, and Jennifer Robinson; 13 great grandchildren; 3 great great grandchildren; one sister, Marcella Browning Wolfe of Falmouth, KY; one brother, Edwin Browning of Lake May, FL; and a host of extended family and friends. Wallace was also preceded in death by his son, David L. Browning on February 12, 2007, his grandson Joshua “Josh” Wilson Browning on June 19, 2009; and his great grandson, Alex Lee Browning on October 8, 2010. Private services will take place at the convenience of the family. In lieu of flowers, memorials are suggested to the Josh Browning Scholarship Fund: c/o Kevin and Pat Browning: 295 Morgan- Berry Road, Berry, KY 41003. Woodhead Funeral Home, Falmouth, is taking care of the family.

Wallace Coleman Browning, Jr., 95, of Cynthiana, KY, formerly of Falmouth, passed away on Thursday, May 5, 2022, at the Cedar Ridge Health Campus in Cynthiana. Born on September 9, 1926 in Pendleton County, KY, he was a son of the late Wallace... View Obituary & Service Information

The family of Wallace Coleman Browning, Jr. created this Life Tributes page to make it easy to share your memories.