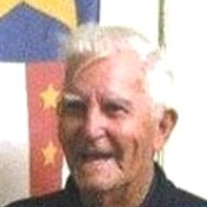 Biography Walter John Points, 94, of Falmouth, KY, passed away on Sunday, February 2, 2014, at his home. Born on April 24, 1919, in Pendleton County, he was a son of the late Eugene and Bessie Jenkins Points. He married Virginia Poore Points, and his dear wife preceded him in death in March of 1982. He was a trucker and glazer with the former Cincinnati Glass Company, a U.S. Army veteran of World War II, and a member of Teamsters Local #100 in Cincinnati. He is survived by 2 sons: Joe Sheperd Points and James Points, both of Falmouth, KY; 1 daughter, Mary Points of Butler, KY; 6 grandchildren: Jamie Messmer, Kevin Peters, Jeff Peters, Lacy Smith, Allen Hoskins, and Joshua Patrick; 6 great grandchildren; 1 brother, Tom Points of Falmouth, KY; and 2 sisters: Mary Fore of Spencerville, IN and Nancy Gorman of Huntsville, TN; several nieces and nephews, including niece, Linda Saylor, and nephew, Benny Taylor; and a host of extended family and friends. The funeral service will be held at 1:00 p.m. on Saturday, February 8, 2014, at the Woodhead Funeral Home, Falmouth. The visitation will be from 11-1 :00 p.m. Interment will take place in the Gumlick Cemetery, Pendleton County with full military honors by the Hardin- Browning Post #109. Memorials are suggested to the Hospice of Hop, 909, Kenton Station Drive, Maysville, KY 41056. Online condolences can be sent to the family at www.woodheadfuneralhome.com

The family of Walter John Points created this Life Tributes page to make it easy to share your memories.

Send flowers to the Points family.