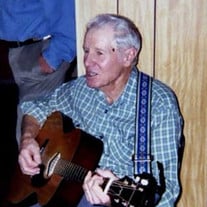 William Alvin Lea, Jr. November 14, 1932 - October 16, 2010 William Lea Jr., 77, of Falmouth, Kentucky, passed away on Saturday, October 16, 2010, at the University of Kentucky Medical Center in Lexington, Kentucky. Jr. was born in Pendleton County, Kentucky, on November 14, 1932, a son of the late William & Nancy Morris Lea. He was a farmer, an avid musician and a member of the Antioch Mills Christian Church. He was preceded in death by his wife Betty Louise Lea on Oct 13, 2009. He is survived by a son Wendell Lea of Cynthiana, KY; a daughter, Patricia Galloway of Brooksville, KY; 6 grandchildren; 9 great grandchildren; 1 brother, Kenneth Lea of Falmouth, KY; and sisters: Emma Candis of Falmouth, KY and Jane (Tookie) Mee of Walton, KY. Funeral services will be held at 2:00 p.m. on Wednesday, October 20, 2010, at the Woodhead Funeral Home, Falmouth, with Bob Jones and Evan Meyer officiating. Music will be shared by Michael and Timmy Cummins and Gary Holmes. Serving as pallbearers will be Paul Cunningham, Alson Cole, Patrick Hill, Gary Holmes, Gary Barnard, and Tom Turner. The honorary pallbearers will be Ed Wiggins, Gordon Smith, Roger Winkle, and Rodney Moore. The visitation will be from 5-9:00 p.m. on Tuesday at the funeral home. Interment will take place in the Mt. Vernon Cemetery, Pendleton County. Memorials are suggested to the charity of your choice or to Hospice of the Bluegrass, 1317 U.S. Highway 62E, Cynthiana, Kentucky 41031.

The family of William Alvin Lea created this Life Tributes page to make it easy to share your memories.

Send flowers to the Alvin family.