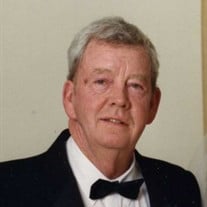 William Burke Coleman, Sr., age 86, of Edgewood, Kentucky, passed away December 8, 2009 at the Hospice of St. Elizabeth Healthcare, after a long illness. Born in Falmouth, Kentucky, on July 12, 1923, he was the son of the late John J. and Ella Burke Coleman. He and his beloved wife, Betty Reynolds Coleman, have been blessed with 55 years of marriage, 5 children and 14 grandchildren. Bill worked for Ashland Oil, Inc. for 30 years, distributing gasoline and fuel oil to service stations and residences in Northern Kentucky. He has been a member of St. Pius X Church for 43 years. Bill spent his youth in Falmouth and on his farm in Hayes Station, and after retiring enjoyed spending time on his farm in Butler. He was known to many as one who loved his family, was devoted to his faith and community, and cherished his Irish heritage. Those who knew him enjoyed his quick smile, his Irish wit and his gentle sense of humor. He is survived by his children: William B. (Maureen) Coleman, Jr., of Columbus, Ohio; Ellen A. (Robert) Isfort, and Julie M. (Paul) Franke, both of Fairfield, Ohio; Kathleen M. (Gary) Kraushar of Springfield Township, Ohio; Joseph E. (Elizabeth) Coleman, of Arlington Heights, Illinois; and grandchildren: Katie, Susan, Ella, Burke, John, Robert, Anna, Michael, Christopher, Grant, Paul, Mary, John and Margaret. He was preceded in death by his sisters Ellen Anne Coleman and Margaret Mary Littelmann, and brothers John J. and Paul P. Coleman. Mass of Christian Burial will be held at 1:00PM on Friday, December 11, 2009, at St. Pius X Church, 348 Dudley Road, Edgewood, Kentucky. The visitation will be from 11:00AM-1:00PM on Friday at the church preceding the Mass. A reception will follow the Mass in Milligan Hall at St. Pius. Interment will take place at 4:30PM on Friday, December 11, 2009, in the St. Francis Xavier Cemetery, Falmouth. In lieu of flowers, memorials may be sent to Hospice of St. Elizabeth Healthcare, 483 South Loop Drive, Edgewood, KY 41017, or to St. Pius X Church, 348 Dudley Road, Edgewood, KY 41017. Woodhead Funeral Home, Falmouth, is serving the family.

William Burke Coleman, Sr., age 86, of Edgewood, Kentucky, passed away December 8, 2009 at the Hospice of St. Elizabeth Healthcare, after a long illness. Born in Falmouth, Kentucky, on July 12, 1923, he was the son of the late John J. and... View Obituary & Service Information

The family of William Burke Coleman created this Life Tributes page to make it easy to share your memories.

Send flowers to the Coleman family.