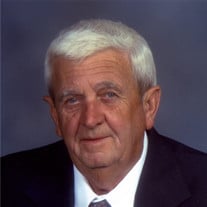 William Parker Fryman, 78, of Burlington, KY, formerly of Harrison County, KY, passed away on Friday, December 21, 2018, at his home. Born on February 5, 1940 in Harrison County, he was the son of the late John W. and Mabel Williamson Fryman. On March 6, 1971, he married Sandra Ingram, and his dear wife survives his passing. Parker was an over the road driver with Roadway Express for 32 years (from Sept. 13, 1967-April 23, 1999), and he faithfully served in the U.S. Army. He attended the Burlington United Methodist Church, and for over 40 years, he enjoyed the Boone County Fair Draft Horse Pull and Shows. In addition to his wife of 47 years, Sandra, he is survived by four children: Taffie Fryman Conner of Burlington, Penny Fryman Davis (Jeff) of Union, Scott Fryman (Tammy) and Troy Fryman (Jill), both of Hebron; 12 grandchildren: Shelby Conner, Kelsey Conner, Emily Conner, Paige Fryman, Mason Fryman, Sam Fryman, Trevor Fryman, Tyler Fryman, Olivia Davis, Zane Davis, Cole Davis, and Airyanah Hicks; his niece, Tammy Thompson Hill; and a host of extended family and friends. In addition to his parents, he was preceded in death by his sister, Alice Carol Thompson. Funeral services will be held at 7 pm on Friday, December 28, 2018, at the Burlington United Methodist Church, 2776 Burlington Pike, Burlington, KY 41005, with Tommy Baker and Pastor Rich Caldwell officiating. The visitation will be from 3-7 pm on Friday preceding the service at the church. Procession for interment in the Pythian Grove Cemetery, Berry, will leave the Burlington United Methodist Church at 9 am on Saturday, December 29, 2018. A memorial service and fellowship will begin at 11:30 a.m. on Saturday, at the Berry Christian Church, 320 Main Street, Berry, KY 41003. In lieu of flowers, memorials are suggested to the William Parker Fryman Memorial Fund, the proceeds of which will be a hosted sponsor at the annual Boone County Fair Draft Horse Pull and Show: c/o any Fifth Third Bank location or mailed donations to be sent to the Fifth Third Bank – Hebron Branch, 3095 N. Bend Road, MD 636211, Hebron, KY 41048 or the Burlington United Methodist Church. Woodhead Funeral Home, Berry, is taking care of the family.

William Parker Fryman, 78, of Burlington, KY, formerly of Harrison County, KY, passed away on Friday, December 21, 2018, at his home. Born on February 5, 1940 in Harrison County, he was the son of the late John W. and Mabel Williamson Fryman.... View Obituary & Service Information

The family of William Parker Fryman created this Life Tributes page to make it easy to share your memories.

Send flowers to the Fryman family.