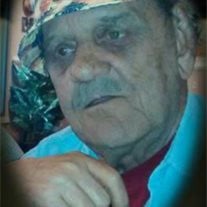 William L. “Willie” Stanfield, 69, 0f Cynthiana, KY, passed away on Wednesday, November 23, 2016 at the Hospice of the Bluegrass Care Center at St. Joseph Hospital in Lexington. Born on July 29, 1947 in Bourbon County, KY, he was a son of the late Clifton and Emma Ratliff Stanfield. He was a farmer, foundryman with Grade Foundry in Cynthiana, where he had 10 years of perfect attendance,  member of the Cynthiana Elks Lodge, The American Legion Post 0017 in Carlisle, and attended the Barlow United Methodist Church. He is survived by a brother; Ray Stanfield of Cynthiana, KY, 2 sisters; Sue Baker of Cynthiana, KY,  Mary (Larry) Williams of Cynthiana, KY, and his special companion Izzy. He was preceded in death by 3 brothers; Gilbert Stanfield, Hillman (Huey) Stanfield, and Clyde Stanfield. Funeral services will be held on Tuesday, November 29, 2016 at 1:00 P.M. at Woodhead Funeral Home in Berry with Daryl Dennie Jr officiating. Burial will follow in the Battle Grove Cemetery. Pallbearers for the service will be Allen Holler, Al Clem, Justin Williams, Renaker Kiskaden, David Chapman, Greg Muntz, Tony Muntz, and Brad Muntz. Honorary pallbearers will be Nieces and great nieces, his special friends at Robinwood Heights, Dr. Dwight Lewis, and Dr. Scott Pierce. The visitation will be held from 10:30-1:00 P.M. at the funeral home.

The family of Willie created this Life Tributes page to make it easy to share your memories.

Send flowers to the family.