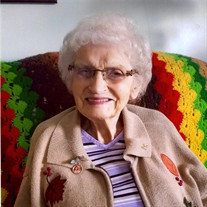 Audrey King McKinney, 92, of the Neave Community, passed over to rest with our Lord on Friday, September 29, 2017. Born in Bracken County on March 28, 1925, she was the daughter of the late Everett Lee and Ida Lillian Cummins King. She was preceded in death by husband of 65 years, Elmo Edward McKinney, Sr, her son, Daniel A. McKinney, and her parents. She is survived by her brother Denver (Mildred) King of Maysville, KY; her two sons: Elmo (Connie) McKinney, Jr. of New Taswell, TN and Michael (Angie) McKinney of Foster, KY; her daughter, Carol (Cricket) Polley of Falmouth, KY; twelve grandchildren; thirteen great grandchildren ; one great great grandchild; and a host of extended family and friends. Audrey married Elmo E. McKinney, Sr. on May 4, 1946 after he returned from World War II. Together they raised their children on a dairy and tobacco farm in the Neave community and faithfully served God at the Neave United Methodist Church. After their children were grown Audrey fulfilled her life-long dream and attended school at Northern Kentucky University in 1976 and graduated in 1980 with a major in Business Education and a minor in English. She worked as a substitute teacher in Bracken, Pendleton, & Robertson County School Systems, but most often at Southern Elementary in Pendleton County. At age 82 Audrey retired from working to stay home and care for her ailing husband. Audrey was a member of the Neave United Methodist Church, the Farmerettes Homemakers Club, and the Bracken County Quilt Club. She taught Sunday School for several years, enjoyed gardening, canning, quilting, cooking, reading, and unexpected visits from those who cared about her. She was always most concerned that all her friends and loved ones come into a loving relationship with the Lord Jesus Christ. She was loved greatly and will be sorely missed. Funeral services will be held at 11 am on Wednesday, October 4, 2017, at the Neave United Methodist Church, 3276 Willow Neave Road, Falmouth, KY 41040. The visitations will be from 5-8:00 p.m. on Tuesday, October 3, 2017, at the Woodhead Funeral Home, Falmouth and from 10-11:00 p.m. on Wednesday, preceding the service at her church. Interment will take place in the Neave Cemetery, Bracken County. Memorials are suggested to the Neave United Methodist Church or the Neave Cemetery.

Audrey King McKinney, 92, of the Neave Community, passed over to rest with our Lord on Friday, September 29, 2017. Born in Bracken County on March 28, 1925, she was the daughter of the late Everett Lee and Ida Lillian Cummins King. She... View Obituary & Service Information

The family of Audrey King McKinney created this Life Tributes page to make it easy to share your memories.

Audrey King McKinney, 92, of the Neave Community, passed over...

Send flowers to the McKinney family.