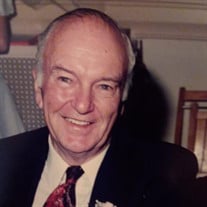 Carl Leroy Blackburn, 93, of Butler KY passed away on Tuesday November 17, 2020 at his home. Born on June 18, 1927 in the Morgan Hightower Area of Pendleton County, Carl was the son of the late Richard and Verna Jones Blackburn. A 1945 graduate of Morgan High School, Carl was a star basketball player for the Morgan Raiders during his high school years and later served in the US Army. On December 31, 1946, he married Dora Inez Galloway and his dear wife of 45 years preceded him in death on February 11, 1992. Carl and Dora spent most of their married life on the farm raising crops and running a dairy. Later on, he delivered milk for Kearns Milk Co and after that drove the Northern Kentucky Senior Citizens van in Pendleton County for 20 plus years. He was a member of The Falmouth Methodist Church but was very devoted to the Mt. Moriah Christian Church. He was named a Kentucky Colonel and loved helping people and offering his services where he could. Carl is survived by two daughters: Barbara Blackburn King of Butler, KY and Linda Blackburn Grizzell (Bob) of California, KY; three grandchildren: Troy (Brandi) McKinney and Melissa (Aaron) Morris of Foster, KY and Jennifer (Mike) McVey of Independence, KY; eleven great-grandchildren: Brooklyn McKinney, Tyler McKinney, Brayden Tucker, Jamison Tucker, Lily Ramsey, Evie McVey, Chloe McVey, Kennedy McVey, Reese McVey, Logan Morris and Tanner Morris; a niece, Doris Blackburn McKinney and several great nieces and nephews. In addition to his parents, he is preceded in death by a brother, Stanley Blackburn and a sister, Christine Blackburn Simpson. Carl also leaves a very dear loving companion, Mary Doan and a host of extended family and friends. Visitation will be held on Friday November 20 at 3 PM to 5 PM pm at Woodhead Funeral Home in Falmouth. The funeral will be private and family only on Saturday. Interment will be at the Riverside Cemetery, Falmouth KY, with full military honors by the Hardin-Browning Post #109. All attending are to wear masks. Memorial donations are suggested to the Mt. Moriah Christian Church or Hospice of Hope: 909 Kenton Station Drive, Maysville KY 41056.

Carl Leroy Blackburn, 93, of Butler KY passed away on Tuesday November 17, 2020 at his home. Born on June 18, 1927 in the Morgan Hightower Area of Pendleton County, Carl was the son of the late Richard and Verna Jones Blackburn. A 1945 graduate... View Obituary & Service Information

The family of Carl Leroy Blackburn created this Life Tributes page to make it easy to share your memories.

Carl Leroy Blackburn, 93, of Butler KY passed away on Tuesday...

Send flowers to the Blackburn family.