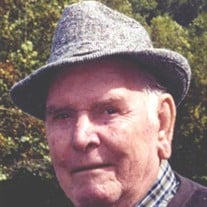 Carl Lee Butcher, 87, of Falmouth, KY, passed away on Monday, September 17, 2012, at his home. Born in Harrison County on March 18, 1925, he was a son of the late Lester and Gladys McClanahan Butcher. On September 7, 1945, he married Martha Trankler Butcher, and his dear wife survives his passing. A graduate of Falmouth High School, he was a well-known Pendleton County farmer, a U.S. Army veteran of WWII, a member of the Antioch Mills Christian Church, Harrison County, a member of the Hardin- Browning Post#109, a former Pendleton County Magistrate, a former member of the Pendleton County Farm Bureau Board, and a former member of the East Pendleton County Water District Board. He loved spending time with his family, his friends, his cows, and square dancing with the love of his life. In addition to his parents, he was preceded in death by a granddaughter, Jennifer Lynn Butcher on May 9, 1991. In addition to his wife of 67 years, Martha Butcher, he is survived by one son, David (Karen) Butcher of Butler, KY; two daughters: Wanda (Blevins) Hensley of Harrison, OH, and Jennie Butcher of Wilder, KY; 4 grandchildren: Kristina (Bobby) Fuller, Angela (Jim) Beane, Allan (Jody) Hensley, and Chad Hensley; 6 great grandchildren; 1 brother, James Kenneth (Jane) Butcher of Cynthiana, KY;1 sister, Geneva King of Butler, KY; and a host of extended family and friends. The funeral service will be held at 11:00 a.m. on Thursday, September 20, 2012, at the Woodhead Funeral Home, Falmouth, with Bro. Evan Meyer officiating. The visitation will be from 5-8:00 p.m. on Wednesday at the funeral home. Interment will take place in the Riverside Cemetery, Falmouth with full military honors by the Hardin- Browning Post #109. Memorials are suggested to the Jennifer Lynn Butcher Scholarship Fund, c/o Pendleton High School, 2359 Highway 27 N, Falmouth, KY 41040.     var item = document.getElementById("tukios_iframe"); // Now calculate our height. if (item){ //Looks like we have tukios_iframe. Lets do stuff var currentWidth = item.clientWidth; var proposedHeight = (currentWidth + 80) * 9/16; item.height=proposedHeight; } PDF Printable Version

The family of Carl Lee Butcher created this Life Tributes page to make it easy to share your memories.

Send flowers to the Butcher family.