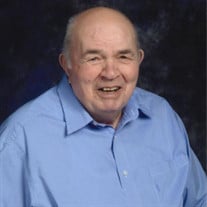 Charles David Enzweiler, 82, of Butler, KY, passed away at his home on Thursday, March 3, 2022, after a long illness. Born on November 18, 1939 in Newtown, OH, he was a son of the late Frank and Florence Blaurock Enzweiler, both of whom preceded him in death by the time he was 6 years old. Charles was blessed to have been raised in the loving home provided by this aunt and uncle, Clem and Euphrasia Reis. He was raised in Saints Peter and Paul Church, where he was a member of the Catholic Order of Foresters, serving as Past Chief Ranger. Charles was also a volunteer with the Northern Pendleton County Fire Department. On May 4, 1963, he married Linda Moore Enzweiler, and together they made the most of every day. For 20 years Charles worked as a maintenance engineer with Cincinnati Commercial Warehouse, before retiring in 2001. Prior to that, he worked for 20 years with the former Ortner Freight Car Company in Covington, KY. Charles faithfully served his country, serving for two years in the U.S. Army. At the center of his life were his faith and his family, all of whom he loved dearly. He always found time to be outdoors working on the farm with his late brother-in-law, Ed Moore, raising a garden, tending to the flower beds, mowing their yard, and golfing with friends and family. In addition to his parents, he was preceded in death by one brother, Gerald Enzweiler; and two cousins, with whom he was raised: Doris Bertram and Dennis Reis. Charles is survived by his wife and best friend of 58 years, Linda, his three children: Debbie (Randall) Winter of Alexandra, KY, Sheri Eglian of Butler, KY, and David (Jaclyn) Enzweiler of Erlanger, KY; 6 grandchildren: Jessica (Robert) Talbott of Butler, KY, Elizabeth Eglian of Butler, KY, Doug Eglian of Ft. Mitchell, KY, Kameron Winter of Alexandria, KY, Kolten Winter of Alexandria, KY, and Arya Enzweiler of Erlanger, KY; 2 great grandchildren: Ella Talbott and Grayson Talbott; one brother, Frank (Dorothy) Enzweiler of Alexandria, KY; one sister, Margie Enzweiler of Florence, KY; one sister-in-law, Barb Enzweiler of Alexandria, KY; several nieces, nephews; and a host of extended family and friends. Mass of Christian Burial will be held at 6 pm on Tuesday, March 8, 2022, at Saints Peter & Paul Church, 2160 California Crossroads, California, KY 41007, with Fr. Jacob Varghese officiating. Visitation will be from 4-6 pm on Tuesday preceding the mass at his church. Inurnment will take place in Saints Peter & Paul Cemetery. In lieu of flowers, memorials are suggested to the Hospice of Hope: 909 Kenton Station Dr., Maysville, KY 41056 or to Saints Peter & Paul Women Who Care, c/o the church. Woodhead Funeral Home, Falmouth, is caring for the family.

Charles David Enzweiler, 82, of Butler, KY, passed away at his home on Thursday, March 3, 2022, after a long illness. Born on November 18, 1939 in Newtown, OH, he was a son of the late Frank and Florence Blaurock Enzweiler, both of whom preceded... View Obituary & Service Information

The family of Charles David Enzweiler created this Life Tributes page to make it easy to share your memories.

Charles David Enzweiler, 82, of Butler, KY, passed away at his...

Send flowers to the Enzweiler family.