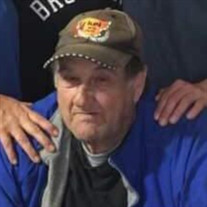 Clarence Goins, 80, of Brooksville, KY passed away on Wednesday, June 16, 2021 at his home. He was born on March 24, 1941 to the late Caleb and Ida Patrick Goins. On March 16, 1964 he married his wife Gloria, who preceded him in death on Nov. 28, 2012. Clarence was a truck driver for Hinkle Hauling Company, and he loved horses, Western movies, classic cars and going to car shows. Clarence is survived by his children, Tina (Donnie) Faul; Lucinda (Harry) Tilton; Clarence Goins, Jr; and Rebecca (Richard) Blum all of Brooksville. He was an excellent grandfather to 14 grandchildren and 13 great-grandchildren. Along with his wife, he was preceded in death by 11 siblings. Visitation will be on Friday, June 18, 2021 from 11:30AM – 1PM at the Woodhead Funeral Home in Falmouth, KY. Funeral services will follow at 1PM with Dennis Marasco officiating. Pallbearers for the service will be his grandsons; Brandon, Chevy, Caleb, Jonathan, Shane , and Charlie. Honorary Pallbearers will be Donnie, Harry, Richard, Jessie, Rebecca, Cindy, Clarence Jr, Phoenix, and Mikey D. Clarence’s final resting place will be in the Riverside Cemetery. Memorials are suggested to the ASPCA: PO Box 96929, Washington, DC 20090-6929

The family of Clarence Goins created this Life Tributes page to make it easy to share your memories.

Clarence Goins, 80, of Brooksville, KY passed away on Wednesday,...

Send flowers to the Goins family.