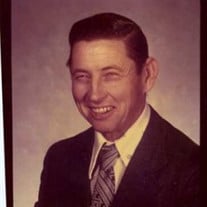 Floyd Joseph Wenzel February 27, 1922 - December 3, 2009 Floyd Joseph Wenzel, 87, of Falmouth, Kentucky, passed away on Thursday, December 3, 2009, as the result of an automobile accident. Born in Pendleton County, Kentucky on February 27, 1922, he was the son of the late Fred and Anna Hess Wenzel. He farmed his entire life on the farm where he was born that has been in the Wenzel family for 148 ½ years. He was a deacon of the Mt. Moriah Christian Church in Butler. On January 31, 1946 he married Wilda Works Wenzel and his dear wife preceded him in death on January 31, 2004. In addition to his parents and his wife, he was preceded in death by a brother, Herbert Wenzel. He is survived by his son, Donald (Mary Ann Nufrio) Wenzel of Falmouth, Kentucky; two granddaughters: Darla (Jon) Tonkin and Donna (Kevin) Hodge, both of Shallette, North Carolina; 6 great grandchildren: Kailey Shields, Kristen Shields, Braxton Tonkin, Dawson Hodge, Jaden Hodge, and Keagan Hodge. Funeral services will be held at 1:00 p.m. on Monday, December 7, 2009, at the Woodhead Funeral Home, Falmouth, with Bro. Darrell Breeden officiating. The visitation will be from 2-5:00 p.m. on Sunday, December 6, 2009, at the funeral home. Interment will take place in the Riverside Cemetery, Falmouth. Memorials are suggested to the Mt. Moriah Christian Church, 314 Highway 17 N, Butler, Kentucky 41006.

The family of Floyd Joseph Wenzel created this Life Tributes page to make it easy to share your memories.

Send flowers to the Wenzel family.